'Birds Requiem' by the voice of the paradise 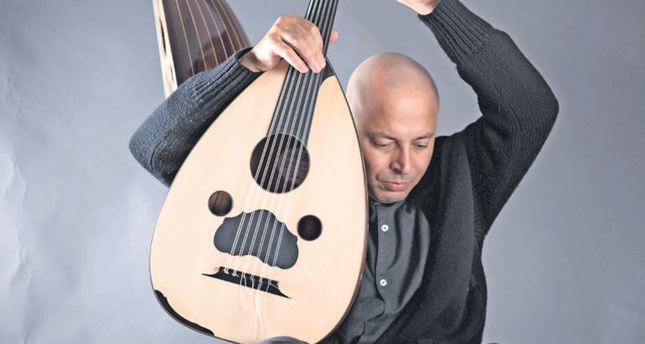 by Özkan Binol Jul 04, 2014 12:00 am
Dhafer Youssef, Tunisian musician, is considered one of the best jazz performers in the world, with his music embellished with Sufi traditions and Arabian lyrics. His album, "Birds Requiem" was selected one of the three best jazz albums in Europe in 2013.

Le Monde announced the album as the best of 2013 in the popular jazz category. Dhafer Youssef is meeting the music fans with his "Birds Requiem" project on July 5 at Harbiye Açık Hava Tiyatrosu.

Dhafer Youssef will display a "beyond the borders" ethnic jazz performance at the concert; showcasing his astonishing vocal and oud technique. Don't miss out on this extraordinary concert. Without question, Dhafer Youssövvvef will again put on an unforgettable performance.

Özkan Binol: When and how did you learn to use your voice like that?

Dhafer Youssef: When I was young, my grandfather introduced me to Quranic recitals. Later, I kept testing my voice singing songs I heard on the radio, in my mother's kitchen and singing between the walls of the local village's hamam (Turkish baths). The resonance produced in both spaces fascinated me. This is how I first discovered the potential of my voice. Then came a long journey, full of work that took me from recording a call to prayer for the local mosque, passing by a local liturgical singing group to where I am now.

ÖB: You make ethnic jazz beyond all boundaries. What really lies in the roots of your music?

DY: I've always been in search of new sonorities pushing the limits of what's possible in terms of new sounds. To achieve this goal I inspire myself from my experiences, books and authors I read, music I hear before turning all that material into music. Besides, Jazz offers a large vocabulary and technique to explore new things.

ÖB: Your music is known for touching so many people. How does it feel when you hear the audience applaud you?

DY: It is comforting to know that your music is appreciated. I am convinced an album or piece of music takes its final shape once it is received by the audience. It is a feeling of achievement.

ÖB: Music is the common language of those who want to reach God with carols and rituals. Are you serving this goal with you voice and music?

DY: I am not serving a particular purpose with my music apart, maybe, from my desire to translate into sounds what I feel inside. When I was young, the mu'adhdhins [the Muslim official of a mosque who summons the faithful to prayer from a minaret five times a day] from the local mosque made me record a call for prayer. The resonances of my voice that flowed from the minaret fascinated me. I was mostly interested in sounds.

ÖB: You are called "The Voice of Paradise on Earth." How does it make you feel to receive this title?

DY: I do not like being labeled in general. I don't seek a particular purpose in doing my music. I am just inspired and when I do, I write songs. I feel like I am in my element.

ÖB: People say that you lighten the darkness with your voice. Do you think that the Lord has given you this voice for conveying a message to the people?

DY: When I was young I used to think it was a gift of god. There's not a particular message I want to convey apart from my desire to make music. At that time, hearing my voice resonating in the mosque's dome was a great pleasure. Since, then I have been trying to perfect my voice and evolve in my art.

ÖB: Let's talk about the "Birds Requem." What kind of a project is it?

DY: "Birds Requiem" is my new album, it is also the most personal of all as I was preparing it at a turning point in my life. For me, it is a return to my origins and those of my music.

The idea behind this project was inspired by a performance in Ludwigsburg, Germany after a performance with Hüsnü Şenlenderci and Aytaç Doğan.

Both of them are present on my album along with other great musicians. Birds Requiem, the title of which came to me once the album was recorded, is structured around the Birds Requeim suite: "Birds Canticum," "Fuga Hirundinum," "Archaic feathers" and "Whirling Birds Ceremony." This structure creates a leitmotif in an album that I imagined as a film score. I always wanted to work with Hüsnü.

ÖB: You work with Hüsnü Şenlendirici. What do you think about him?

DY: I always wanted to work with Hüsnü and this album was a great opportunity to make this collaboration happen. Hüsnü is a virtuoso. He doesn't play, he sings through his instrument. Besides I appreciate him as a friend and this is important when you work with someone.

ÖB: How does Istanbul inspire you?

DY: This city is like a muse to me! It inspires my music. It opened the way to multiple collaborations. Moreover, Birds Requiem album was partly recorded in Istanbul and it inspired one of it songs; "39th Gülay" which is dedicated to It.
Last Update: Jul 04, 2014 1:09 am
RELATED TOPICS