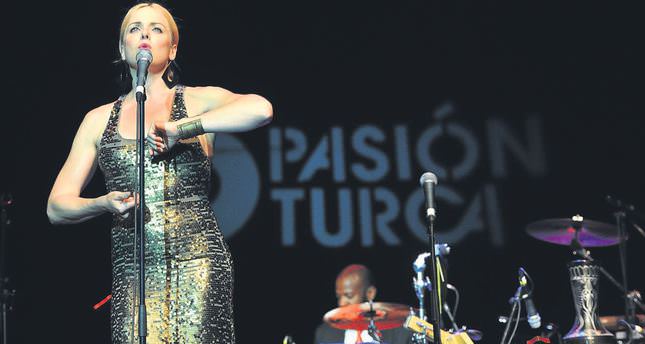 by Daily Sabah Jul 16, 2014 12:00 am
The famous music group Pink Martini gave a exclusive concert on July 14 upon popular request because tickets for their scheduled performance together with Buika on July 15 at Harbiye Cemil Topuzlu Amphitheater were already sold-out. Performing for nearly two hours without a break, Pink Martini enchanted the audience with their energy and musical charm. The well-organized concert featured surprise musicians along with the Portland-based group that is admittedly the most favorite foreign ensemble of Turkish jazz devotees.

The American band displayed their multilingual repertoire from Latin, Lounge and European classical music to jazz. The group members do not miss any opportunity to perform on concert stages - not only around Europe and the U.S., but also in Turkey. The group performed in various languages -
English, German, Persian, French, Turkish and Spanish. They also invited the Von Trapp Family, a Jewish musical group that is composed of the young members of a family that managed to escape from the persecution of the Nazi regime in the 1940s.

Pink Martini is also tackling famous Turkish film music. Upon a recommendation by an American professor, they had the chance to listen to a collection of Turkish film music including Belkıs Özener's songs. Later, they met with Özener, who is famous for her Yeşilçam movie songs. At the concert in the Amphitheater, they surprised the audience and invited Belkıs Özener to accompany them while they performed a well-known Turkish song of hers. Belkıs Özener was so honored that she had difficulty expressing her feelings. "This is one of the most beautiful nights in my life. The interest of the band and the attention of the audience showed me that people really appreciate genuine art, which makes me so happy," the veteran singer said. Pianist and composer Thomas Lauderdale spoke to Sabah newspaper about the band's history and their growing interest in Turkey.

"When Pink Martini first appeared with China Forbes, we never thought it would achieve such a big success from performing nostalgic music on special days to create an impressive atmosphere of 1930's and '40's orchestral music," Lauderdale said. He also said that from the very beginning they have successfully showed the uniting power of music through multilingual songs. "We still continue to tell the stories of different cultures based on the same global pop trend," he added.

Arranged by Madrid-based entertainment agency Pasion Turca, Pink Martini was on stage in Istanbul for the first time during the 8th International Jazz Festival. The band's albums became popular over the years and they gave more concerts in Turkey. Pink Martini's musicians enjoy Istanbul's nightlife with delicious Turkish cuisine after their concerts. "Istanbul makes us feel as if we were meeting our close friends. Both our team and record company say Turkish people love our songs. We feel their enthusiasm at concerts, and leave Turkey with unforgettable memories. I believe we have become friends with the Turkish audience. We say we are going to see our friends every time we take a flight to Turkey," Lauderdale said.
Last Update: Jul 16, 2014 12:52 pm
RELATED TOPICS