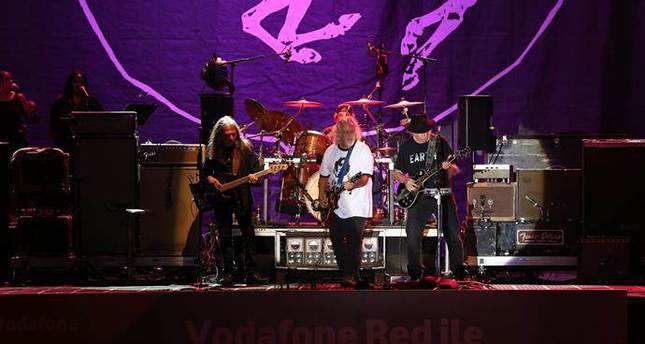 by AA Jul 17, 2014 12:00 am
Rock star Neil Young and his band Crazy Horse have performed their first ever Turkey concert in Istanbul which is the fifth stop of an 18-city European tour The renowned singer and songwriter Neil Young, dubbed "The Godfather of Grunge," performed in Istanbul on Tuesday night with a repertoire focusing on his early songs.

Welcomed by more than 6,000 fans, the 68-year-old musician gave his firstever performance in Turkey, playing to long-suffering fans who had waited for years to see the Canadian come to these shores. Turkish alternative band Büyük Ev Ablukada and American folk-rock band Midlake, from Texas, opened the show.

Midlake, which performed two sold-out concerts at Salon İKSV in 2010, added Istanbul to their tour program recently, and Tuesday's performance marked their second outing in the city.

Playing at Küçükçiftlik Park concert area in the city's Maçka quarter, Young arrived on stage at 10 p.m. along with Crazy Horse members Frank "Poncho" Sampedro and Ralph Molina, as well as Rick Rosas, standing in for Billy Talbot who recently suffered a stroke, and two backing singers.
The set, which lasted about two hours, featured classic songs such as "Only Love Can Break Your Heart," "Heart of Gold," "Rockin' in the Free World" and a cover of Bob Dylan's "Blowin' in the Wind."

Described by the Rock and Roll Hall of Fame as "one of rock and roll's greatest songwriters and performers who has been a cult hero and a charttopping rock star," Young has also won the hearts of millions as an advocate for environmental issues, education and the welfare of small farmers. Young and Crazy Horse began their European tour on July 7 in Reykjavik, Iceland. However, the Canadian singer cancelled a concert he was scheduled to give Thursday in Israel, leaving more than 30,000 fans disappointed. A statement released on behalf of Young and his group said the concert was called off because the region was under Hamas' rocket fire, according to a warning from Israel security officials.
RELATED TOPICS