Borusan Philharmonic on the world stage at BBC prom 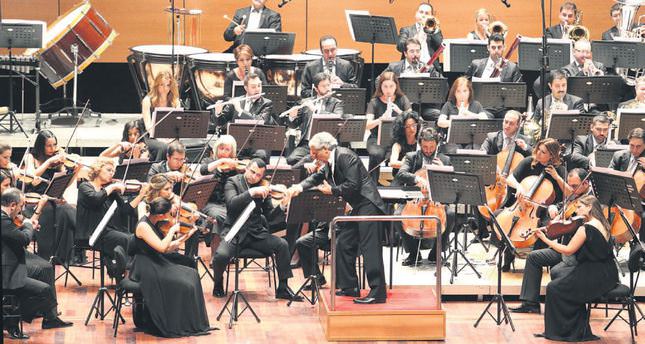 by Daily Sabah Jul 28, 2014 12:00 am
One of Turkey's most respected orchestras, the Borusan Istanbul Philharmonic, has been invited to play at the BBC Proms, one of the most prestigious classical music festivals in the world, which will take place on Tuesday.

The Borusan Istanbul Philharmonic Orchestra (BIFO) has been invited to one of the biggest classical music festivals in the world, BBC Proms, which is watched by 1 million people every year. BIFO's concert on July 29 will be watched live by 6,000 audience members and will be broadcast live by BBC Radio. The BBC television will later broadcast the concert on T.V.

Celebrating its 15th anniversary in 2014, BIFO made quite a name for itself with their 2010 album. That same year, the orchestra performed at the Salzburg Festival. Some of the world's most important tenors and sopranos have performed concerts in Turkey thanks to BIFO. Recognizing its success, the British took action and invited the orchestra to BBC Proms.

Speaking to AKŞAM, a Turkish daily newspaper, general manager of the Borusan Center for Art and Culture, Ahmet Erenli talked about the invitation, preparations and the details of the concert. Erenli said after launching the orchestra's first album in 2010, that they received an invitation from London as the British found the recording very pleasing, especially Ottorino Respighi's piece "Belkis, Queen of Sheba". "They asked us to go there on the condition we play Respighi's peice. We invited the international press to every concert we had after the successful album in 2010.

Reviews from the press found a place in their own media [published internationally]," said Erenli. He added that more than 60 foreign press members came to Turkey. Erenli, speaking of their excitement about performing at a unique festival in Europe, said, "This is a very 'British' festival. The festival appeals to them. The artists are coming from all over the world and they give approximately 75 concerts.

Almost every concert is broadcasted on the radio. Ours will be broadcasted too." He added that the festival will be shown on TV on Aug. 31 and also a DVD of the concerts will be produced.

Viewing the invitation as an important promotion, Erenli said BIFO is being treated and supported like other prominent orchestras around the world.
Erenli emphasized the importance of reaching this level after only 15 years. He said they are a new and young orchestra compared to the Vienna Philharmonic, which reached a high level of maturity after 100 years of existence. He said that it is a small step for Turkey and although many good artists come to perform concerts here, there should be local projects produced in Turkey as well.

To overcome this downside, Erenli said they commissioned a new piece from Phillip Glass that will premiere in Los Angeles in 2015. He added that this invitation will help them recognize as well as increase awareness of classical music in Turkey. He said the repertoire will appeal to British spectators since the BBC Proms has a different type of audience from Central Europe. "There were some pieces we wanted to play but they were not found suitable for the festival. They specifically requested 'Queen of Sheba' by Respighi.

We will play a five minute piece from Handel as well as Holst's 'Beni Mora.' Although I oppose it, our repertoire also includes 'Die Entführung aus dem Serail' [The Abduction from the Seraglio] by Mozart. They told us that the British would like to hear this piece by Mozart from a Turkish orchestra. There will be a world premiere of one of the works by Gabriel Prokofiev and Daniel Hope that will accompany us."
Last Update: Jul 28, 2014 1:26 am
RELATED TOPICS