Sistema Europe Orchestra Camp to be held in Istanbul 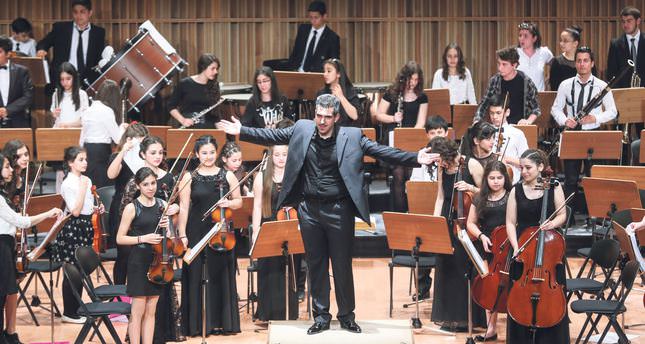 The second Sistema Europe Orchestra Camp, organized for the first time in Vienna last year, will be held in Istanbul in August 2014. Two - hundred children will participate in the event with trainers from nine European countries

The Music for Peace Foundation is hosting the second Sistema Europe Orchestra Camp in collaboration with the Foundation for Culture and Arts (IKSV) as of tomorrow until Aug. 22 in Istanbul. The camp was held for the first time in Vienna as a part of the 2013 Salzburg Festival. The event is taking place at Bogaziçi University with the participation of 200 children and trainers from nine European countries. Young attendees have the chance to perform music and rehearse on an international platform for a week.

The upcoming music camp will be carried out under the conductorship of Bruno Campo and Etienne Abelin, a member of the Bologna-based Orchestra Mozart and the Lucerne Festival Orchestra. In addition to the Music for Peace Orchestra, the camp is accommodating 200 children between the ages of 10 and 19 from Austria, Denmark, the U.K., Sweden, Italy, Portugal, Croatia and Switzerland. More importantly, the event includes a special program, El Sistema Model-based Training Camp, to educate future El Sistema trainers. Founded in 1975, El Sistema is a publicly funded voluntary sector music education program in Venezuela.

About 'Music for Peace' The Music for Peace Foundation was established in 2005 by architect Mehmet Selim Baki and Yeliz Baki with the main objective of spreading the music of peace by providing free musical education to as many children as possible and removing any barriers to music.
So far, the foundation has given free education to 4,000 students. In 2012, Music for Peace was included as a member of Sistema Europe, which includes 29 European countries, and was recognized as one of the program's best practices. The foundation was officially accepted in June 2014 by a friendship agreement between founder Jose Antonio Abreu and Fundamusical Simon Bolivar Director Eduardo Mendez. IKSV has been the corporate sponsor of Music for Peace and supported the orchestra with the Tulip Card membership program since 2013.
Last Update: Aug 14, 2014 2:08 am
RELATED TOPICS