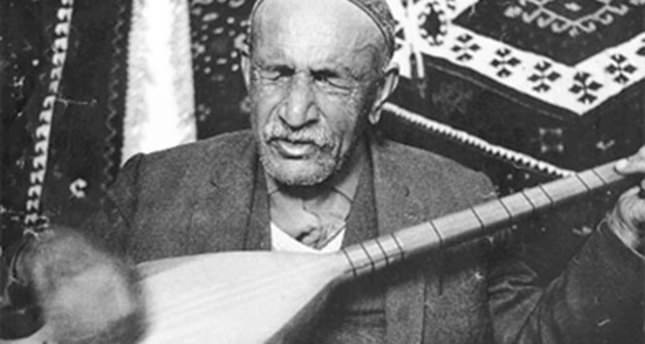 by Daily Sabah with AA Aug 22, 2014 12:00 am
Established by 20 art history students at Karabük University (KBÜ), the Aşık Veysel Musical Group is preparing for a concert tour across Turkey. Intending to pass on the work of famous Turkish folk poet and songwriter Aşık Veysel Şatıroğlu to future generations, the group will take the stage in 16 cities. Artistic Director Numan Çakır, a student in his final year in the History of Art Department, said they are excited to appear on stage under the consultancy of Aşık Veysel's granddaughter Nazender Süzer.

Speaking to the Anadolu Agency (AA), Çakır pointed out that Aşık Veysel is one of Turkey's most important cultural icons. "We must keep his work alive and promote it in a proper way," he said. The young student said that he had previously made a short film called "Çiçeğin Beyi" (The Flower's Mister), featuring Aşık Veysel's daily life. "I tried to show one day in his life," he said. "Our musical group was established last year. We could not reach a large audience at first, but will tour Turkey soon. Our group is ready to tell more about him," Çakır added. "We received great support from our chancellor, Professor Burhanettin Uysal. Our group does not work for commercial purposes, this is because we cannot find enough sponsors," he continued. Additionally, Süzer said, "I believe these 20 students realize the current cultural erosion and have started to explore their origins. They try to feel and understand my grandfather, although they live far away from his home. They successfully re-interpreted his works in a musical." The group received great reviews when they performed their work.

Aşık Veysel is known as Turkey's most prominent Anatolian bard of the 20th century. At the age of 7, he suffered from smallpox that broke out in Sivas from which he lost sight in his left eye. Following a later accident, his right eye was also blinded. Aşık Veysel inherited a bağlama from his father and successfully recited folk poems even though he was blind. The musical genius devoted his whole life to playing bağlama and singing. He learned how to play the instrument by listening to its sound very carefully. His father's friend Ali Ağa greatly supported him and taught other works of historical bards such as Pir Sultan Abdal and Karacaoğlan.
Last Update: Aug 22, 2014 1:55 am
RELATED TOPICS