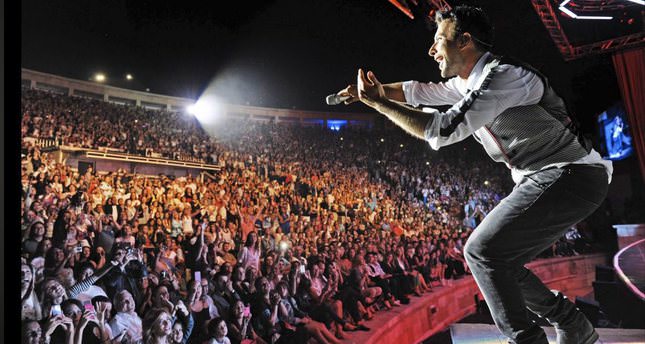 by daily sabah Aug 24, 2014 12:00 am
One of Turkey's greatest pop music stars, Tarkan, entertained European, Russian, Middle-Eastern and Azeri fans at the 2014 Monte-Carlo Summer Sporting Festival marking its 40th year in Monaco. Tarkan's show was the closing performance on the legendary stage of Salle des Etoiles last Friday. The megastar was on stage for almost two hours, singing 20 Turkish and English songs for music lovers. Tarkan opened the concert with prominent Turkish singer and songwriter Sezen Aksu's "Firuze," followed with his own all-time favorites such as "Unutmamalı," "Şımarık," and "Acımayacak." Among Turkish celebrities who attended the festival were Neslihan and Yalçın Sabancı, İdil Fırat, Revna Demirören and Jülide Ateş. Turkey's Ambassador to France Hakkı Akil and his wife were delighted with Tarkan's dynamic performance. The megastar was reportedly the only singer who performed to a full house at the festival that kicked off back in July 7. A total of 850 viewers enjoyed an unforgettable concert night. The festival was a fusion of East and West cultures with performances by a number of other world stars including Elton John, Julio Iglesias, Neil Young and the Gypsy Kings.
Last Update: Aug 24, 2014 6:15 pm
RELATED TOPICS