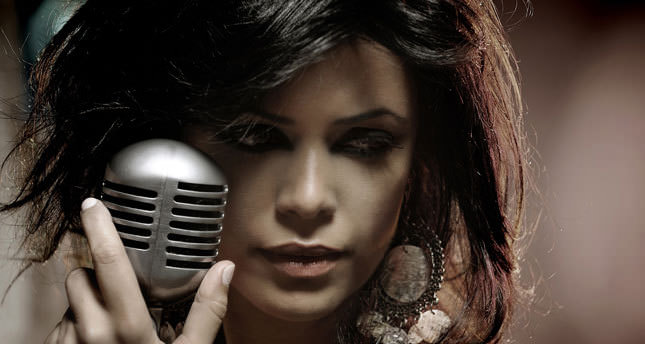 by Daily Sabah Aug 30, 2014 12:00 am
Organized by Pera Event, Yasmin Levy performed at the Cemil Topuzlu Harbiye Open-Air Theater as a part of Turkcell Yıldızlı Geceler (Starry Nights) concerts on Aug. 28. One of the world's extraordinary interpreters of Ladino music, Levy mesmerized the audience with different tastes from Spanish Flamenco, Argentine Tango and Portuguese Fado. The talented singer welcomed the audience in Turkish and English and performed "Sevda" (Love) and "Cada Dia" (Every Day) as opening songs, wearing a simple but elegant white dress. Levy expressed her happiness to perform in Turkey: "I am not a politician, but would like to say most of my family and friends asked me not to give a concert in Turkey due to the current situation in Gaza and Israel.

My heart did not listen to them. I am really happy to be here and say from my heart that Turkey is my second home." She was warmly applauded by the audience. Levy's concert repertoire included "Nací en Álamo" (I Was Born in Alamo), "Hasta Siempre Amor" (Forever Love) "La Alegría" (Joy) "Me Voy" (I'm Going), "Una Noche Más" (One More Night) and "Firuze." She surprised the audience and invited Turkish singer and composer Zülfü Livaneli on stage. Levy performed "Yiğidim Aslanım Burda Yatıyor" (My Brave Man Sleeps Here) and "San Ton Metanasti" with him. Before Livaneli left the stage, he said, "We are the people who support peace at home, peace in the world," and received a standing ovation for minutes. Levy continued her performance with "Adio Kerida" (Goodbye Beloved), "La Cumparsita," "Libertad" (Liberty) and "Olvidate de Mi" (Forget Me). Turkish instruments gave a added to the live performance with Levy's strong and passionate voice that captured the audience. The singer harmonized different musical cultures with her mesmerizing voice and songs.
Last Update: Aug 30, 2014 1:54 am
RELATED TOPICS