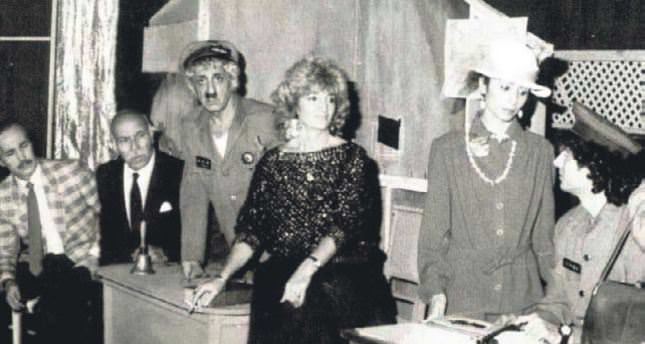 by AA Sep 03, 2014 12:00 am
Established under the commission of the then Istanbul Mayor Cemil Topuzlu in 1914, Istanbul Municipal Theaters is joyfully celebrating its 100th year. Municipal manager of the Culture and Social Works Directorate, Abdurrahman Şen, spoke to an Anadolu Agency (AA) reporter about the upcoming celebrations that will take place starting from Sept. 29 and will continue throughout 2015 and 2016.

So far, the Municipal Theaters have marked their 100th anniversary with a number of exhibitions on theatrical costumes and with photos that take visitors on a journey of the theater's history. Additionally, special lighting designs were installed in theater halls with restoration works underway, and a memory medallion was created to honor this year. The celebrations will continue with a special play that will be performed on Nov. 17.
The theaters also renewed their annual repertoire.

One of the cornerstone performances, "Cibali Karakolu" (Cibali Police Station) will be performed. Apart from exhibitions and special performances, 10 books will be published to inform theatergoers about the history of Municipal Theaters with the archive of the theaters to be given for reference. Other resource books will also be on sale in bookstores. "From October, we will introduce a new book each month.
There will be concurrent events that will mark the 100th year of both Istanbul Municipal Theaters and Turkish cinema including new publications and presentations that promotes the masters of our cinema," Şen said.

Additionally, the theaters are introducing new plays to the audience - as they do every year. Şen underscored that "Cibali Karakolu" and "Kerbela" (Karbala) are the two most prestigious performances of the new season. For 2014-2015, the theaters will present four or five new plays. Şen added that the institution will regenerate under with new General Artistic Director Erhan Yazıcıoğlu. "The municipal Theaters will undertake a mission relevant to their traditional history with Yazıcıoğlu's experience, knowledge and vision. We hope that they will rediscover their unique soul this year," Şen continued.

Sept. 29 will mark the opening ceremony of the 2014 theater season. Similar to previous years, there will be concerts, theater performances for children and adults, exhibitions, panels and commemoration events. Moreover, a new project "Museum Theater" will commence starting in October. The special presentation intends to keep tradition Turkish theater alive. "How traditional Turkish theater should be preserved is always open to discussion. We should answer the question of whether presenting plays with the same script or a contemporary one that is harmonized with today's world.

I believe the answer lies in the second choice," he added. Şen went on to describe "Museum Theater" as a display of both modern and traditional versions of plays. "I believe they can see the changes from the past to present," he said.Last year, Istanbul Municipal Theaters introduced 3,000 plays. "Rather than discussing the number of plays and audience, our principal aim is to present more qualified and aesthetic performances. Presently, there are 16 theaters and cultural centers including the new ones. By the end of 2014, one or two new theater halls will be open to public. Şen concluded that the new season's program is shared with the cultural centers and each venue will present musicals, theaters and panels.