Heartwarming and full of love: IMA 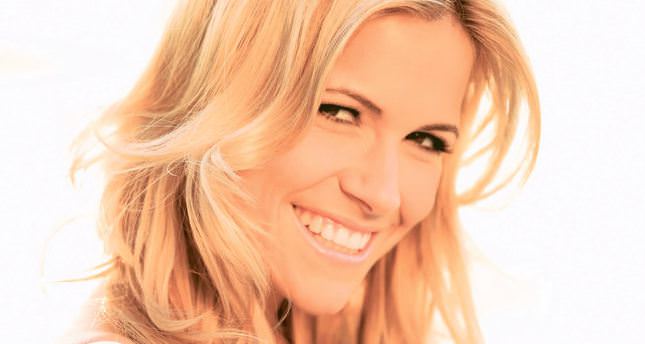 Marie-Andree Bergeron, better known by her stage name Ima, is among the most acclaimed Canadian singers along with the likes of Celine Dion, Bryan Adams, Alanis Morissette and Shania Twain

The French-Canadian singer crowned her success with her third album "Smile," a mix of jazz classics, which stayed on the Canadian music charts for over 60 weeks after its release in 2007. The singer has produced work in Italian, English, Spanish and French. Music enthusiasts are enchanted with her unique interpretations of well-known love songs. Ima will once again stir Turkish fans with her romantic and lively performances this September.

On Sept. 13, Ima will be ready to take to the stage with a few surprises at Akasya Acıbadem Park in Istanbul. Last year, she attracted media attention with her beauty and voice during her visit to Turkey for the launch event of her album "A La Vida." Despite the fact that she comes from a cold country, Ima warms up audience with her love songs. Canada's newest superstar Ima performs Mediterranean songs in different languages, just like legendary singer Dalida.

In an exclusive interview with Daily Sabah before her performance, the singer talked about Turkey, her career and her songs.

Daily Sabah: Your latest album has many hit songs from the 70s. Could you tell us more about "Precious?"

Ima: This album includes mostly songs by male singers. Soul, rock and disco music of the 70s have a naive nature embraced with pure love. Precious is full of love in which I had the chance to interpret the songs of special stars such as Rod Stewart and Al Green.

DS: Although you are a Canadian, your songs are reminiscent of Mediterranean music, especially because you sing in French, Spanish, English and Italian. Do you think you got closer to Mediterranean scene while you spent your childhood in Montréal?

I was always a big fan of Edith Piaf. It is not necessary to know a language to enjoy a song. I had times when I learned a new language after I fall in love with a song.

DS: In addition to your heartwarming Mediterranean songs, your album features different styles like folk and pop rock. How would you describe your music?

Ima: I can say the language of love lies in my songs. I perform the songs whose story I enjoy most and touch my heart. Over the years, I collected the stories of the countries I visited and people I met. I have many stories from Italy. You are right, I harmonize Latin, rock and folk music in my songs, but love and heart are the nature of my music.

DS: Canada has introduced many superstars such as Alanis Morissette to the music industry. Are there any Canadian singers that inspired?

Ima: Celine Dion. I was greatly inspired by her when I was a child. As I said before, I used to listen to Latin songs during my childhood. I was also listening to Edith Piaf and Dalida. I think Alanis Morissette is a great songwriter and singer.

DS: In the past, you re-interpreted "Le Temps Des Fleurs" by legendary singer Dalida, famous for her Mediterranean image. You are reminiscent of Dalida not only with your songs, but also your appearance. Do you feel close to her?

Ima: As a woman, I have heartbreaking love stories. However, Dalida's story and suicide are, of course, very tragic. Admittedly, I become a drama queen when it comes to love.
Although I enjoy singing songs about broken hearts, I do perform the songs that make us cheerful. I enjoy my life as much as possible.

DS: We watched a music clip by Turkish superstar Ajda Pekkan while we were talking about her. How did she make you feel?

Ima: She looks pretty and cool, and her voice is very beautiful. I know she sang the songs of legendary singers such as Mina and Dalida just like me, so I feel close to her. It is no longer enough for me to sing my songs to a Turkish audience; this is why I rehearse Turkish songs. I even learned the Turkish version of "I Will Survive," and might surprise people on stage some time.

DS: What surprises do you have in the near future?

Ima: We had a good beginning with "A La Vida" full of lively songs.Last autumn, "Smile" was released with sad and romantic songs. Recently, my latest album "Precious" was introduced to the music market.

From now on, I will take to the stage with both romantic and energetic songs. Each concert ends with new memories. I am currently preparing
for new concerts in Turkey.