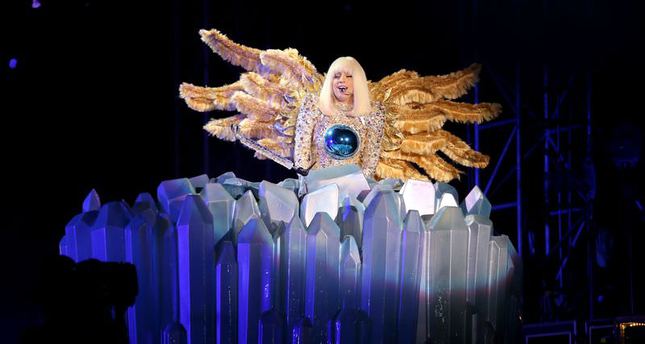 by AA Sep 17, 2014 12:00 am
American singer Lady Gaga, widely regarded as the natural heir to Madonna's Queen of Pop throne, has hit the stage in Istanbul for her first performance in Turkey.

The concert kicked off the Grammy award-winning singer's European leg of her tour backed up by a 144-member team consisting of dancers, creative directors, stylists and technicians.

Famous for her outrageous outfits, Lady Gaga can change her stage costumes in a record-breaking 30-second time frame.

Gaga, who changed more than five outfits during her performance, also took off her dress in front of her fans just before singing her well-known song "Bad Romance".

Singing more than 10 songs, the American singer performed her most popular songs of the last few years, including "Alejandro", "Applause", "Poker Face", "Born This Way" and "G.U.Y".

Addressing her fans in Turkish, Gaga said: "Sizi seviyorum" (I love you), and praised her transsexual fans.

"I travel all over the world. Believe me, it is really hard to be gay. Be proud of yourself, it is no matter what you are. He (God) loves all of you," she said.

The 28-year-old, whose real name is Stefani Joanne Angelina Germanotta, will perform 78 concerts in 68 cities during her tour, which began on May 4 and will end on November 10.

The tour will take place in North America, Europe and Asia in support of her third album, Artpop (released in 2013).