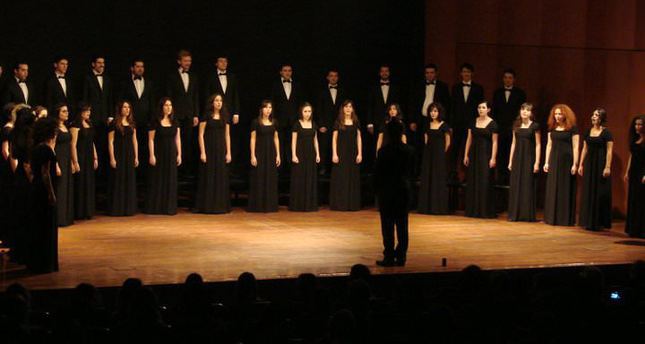 by Zeynep Esra İstanbullu Oct 18, 2014 12:00 am
The Boğaziçi Jazz Choir, which previously continued its musical journey under the Boğaziçi University Music Club (BÜMK) from 2007 to 2011, will represent Turkey at the Polyfollia Choral Singing Festival in Saint-Lo, France. Since its foundation, the choir, conducted by Masis Aram Gözbek, has reached more than 1 million spectators in 25 cities in nine countries around the world. The choir came first in the Word Choir Competition held in Austria three years ago.

Referred to as Europe's most prestigious choral singing festival, Polyfollia has gathered the best choirs since 2004 and has invited 11 ensembles for this year's event. Choral singing comprises a wide range of styles from pop, rock, jazz and folk to classical. The festival provides an exciting opportunity to listen to successful choirs that bring a breath of fresh air to this creative art. From Oct. 21 to Oct. 26, the Boğaziçi Jazz Choir will perform a special repertoire in the highlighted venues of Saint-Lo. Choir members will sing selected works by Turkish composers Hasan Uçarsu and Erdal Tuğcular along with some of the world's best choral music composers such as Milko Kolarov, Eric Whitacre, Enrique Munoz and Ko Matsushita. The flourishing group has received many awards at international music competitions and festivals in the U.S., China, France, Italy, Hungary, Bulgaria, Germany and Austria. The choir broke its ties with the Boğaziçi University Music Club and formed an independent group with different members and conductor in 2011. Again in the same year, they instantly became one of Turkey's well-known choirs when they performed the famous gospel tune "Joshua Fit the Battle of Jericho" out of the blue, while they were on a metrobus in Istanbul. Their entertaining performance immediately went viral and was widely shared on social media.