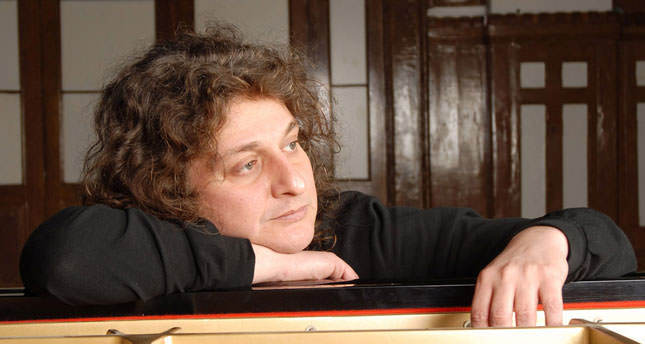 by AA Oct 21, 2014 12:00 am
Pianist and composer Tuluyhan Uğurlu accompanied Cahit Koytak, the author of "The Gaza Pamphlet" (Gazze Risalesi) at the Living Gaza event at the Neşet Ertaş Art and Performance Center in Ankara. Speaking to an Anadolu Agency (AA) reporter after the program, Uğurlu said he was proud to share the stage with Koytak, who he knows from his other works and that they might even record an album together as well.

Uğurlu said that in order to accompany a poem on piano, one should have complete familiarity with the text. "You have to have a good understanding of literature and what the poet talks about in the poem," he said, adding that it is better to know the poem line by line. "For instance, when the poem talks about bombs and tanks, the piano has to give a bomb effect. The most important and valuable aspect about this event is that a concert pianist, composer and a person who was trained in Western music can compose a tune inspired by 'The Gaza Pamphlet.' Our artists who work on polyphonic music always produce compositions similar to Western music," he said. Uğurlu mentioned that the piano is seen as an instrument that is intrinsic to the West. "But we are in the 21st century - we have forgotten what we know and learned new things," he said, emphasizing it is time to forget what we know about the piano and replace them with fresh knowledge. "Now, a pianist pays attention to Gaza, Egypt and the Middle East and is able to talk about the problems of that region through piano. This is why I am on the stage - I am representing people who do not lose their identity just because they have a Western education and forget their native language when they go to Europe for 15 days," he said. Although he has performed around the world, Uğurlu said Turkey and the Middle East are the two places where he feels happy, as these areas welcome change with tolerance. He expressed his wish to perform in Gaza and said, "I want to articulate those people's pain with my music." He said that Gaza is the Turkish people's national problem just as is that of Turkmens in Tal Afar. "Baghdad or Damascus is no different than Şanlıurfa or Diyarbakır," he said, adding that Gaza and the children in Gaza are his priority. "People who do not care about Gaza are blind. Their heart is cold, I hope one day they will also understand," he said.

Uğurlu said that he feels for Baghdad, Damascus and Gaza as he sees them as his own cities. He emphasized that Turkey is home to all people who are oppressed, and pointed out that Jews who were exiled from Spain took shelter in the Ottoman Empire centuries ago. "We should take care of the children who are in need of help as they are not so different from our children," he said, and called for other artist to help those children. "The intellectuals of this country have to give a helping hand to those people. It is our duty as human beings, however, we must lead as artists since we should be more sensitive," he added. He said all revolutions started with music and musicians, and that eventually, all nations find their true selves. "I believe the people of Turkey will see the reality under the leadership of artists," Uğurlu concluded.

The artist's talent was discovered at the age of four and he was later granted admission to the Istanbul Municipality Conservatory. He became successful in the Wonder Children Exam when he was seven and went abroad to receive his music education. He completed his higher education at the Vienna Music Academy and decided to only play his own compositions while he was studying for his master's degree. He gained fame through the musical score for "Istanbul Kanatlarımın Altında" (Istanbul Beneath My Wings). "Go With God," "Kutsal Kitaptan Ayetler 1 ve 2" (Verses of Quran 1 and 2), "Mustafa Kemal Atatürk ve Güneşin Askerleri" (Mustafa Kemal Atatürk and the Soldiers of the Sun), "Beyazıt'ta Zaman" (Time in Beyazıt), "Senfoni Türk" (Turkish Symphony), "Dünya Başkenti Istanbul" (World Capital Istanbul) and "Sonsuza Kadar Istanbul" (Istanbul Forever) are some of Uğurlu's notable works.