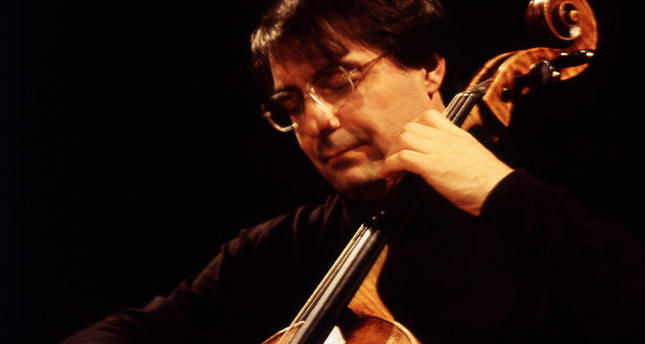 İş Sanat welcomes its 15th season with the concert of one of Turkey’s prominent orchestras, Borusan Istanbul Philharmonic Orchestra (BİFO), with pianist Hüseyin Sermet and conducted by Alpaslan Ertüngealp

BİFO, which enjoys the privilege of being the first Turkish orchestra to perform at the world's leading classic music festival, BBC Proms, will leave classic music lovers breathless on Nov. 1.

Daily Sabah: As a maestro continuing his career abroad and collaborates with the most prestigious orchestras in the world, what do you think about the status of your professionand the system of orchestras in Turkey compared to the West?

Alpaslan Ertüngealp: I think this issue is so important that even a conference would not be enough to discuss it, but unfortunately, I cannot comment positively. There should be radical changes to and reconstruction of Turkish orchestras and their operations. Adopting foreign systems and making a few adjustments cannot create this change. Turkey will find its own system following a long period of studying others. This process might take years, however, as laws and regulations cannot be written in two days, they should be formulated to embrace both today and the future. There are very few qualified staff and artists who can achieve this target, and unfortunately they are not recognized by any platform.

DS: For many years, you were the assistant of the world famous Italian maestro, Claudio Abbado, who recently passed away. It is a source of pride for us to have a Turkish maestro working in such position. What is the biggest aspect of this experience contributed to you and your career?

AE: Working with Abbado and learning from him was a great privilege, both for Turkey and myself. Today, there is no maestro other than myself who has the same music and artistic background as well as experience in Turkey. I am a first in history, especially in the history of the Republic of Turkey, and there will always people who want to overlook this. Turks who are appreciated abroad never become well-known in their homeland. I became Abbado's only assistant and proxy during the last three years of his life. I was in charge of the stage, archives, lightening, Deutsche Grammophon album recordings and coordination and control of the DVD of the Lucerne Festival. I had control over all communications about orchestras and concert halls. I was the first one who got in touch with the soloists before the concerts. During rehearsals and concerts, I assisted him as maestro and even conducted in his place. There were many projects that he planned, and it saddens me he will not be able to experience all of that; however, the experience and the artistic background that I acquired in the last three years is very comprehensive and thorough. I am the first Turkish maestro who worked with the Berlin Philharmonic, La Scala, Maggio Mysicale, the Lucerne Festival Orchestra and many more as well. Turkey can benefit from it and it should, otherwise things might become worse for Turkey regarding classical music. But in the end, it is a choice; nations shape their own fates. I provide the opportunity and I will keep on doing it.

DS: As an assistant to Abbado, you have changed the perception of Turkish maestros in the world. What is your advice to new generation maestros?

AE: My first piece of advice is that they should get a serious musical and artistic education regardless of their age. Everyone who picks up the baton thinks that they are real maestros, so much so that the reputation of the profession falls into disrepute. Orchestras and maestros have a mutual agreement, yet the audience and the nation are being deceived. Young people, your music and maestro education should have a good foundation. As we all know, Turkey does not have an institution that offers proper education to maestros and there is no substructure for it either. There are some attempts for it; however, being a maestro is not all about waving the baton. There are not enough lessons to support the knowledge and educate a maestro whether you hold a baton or not. It is not enough to learn about harmony or try film score orchestration. It is a profession similar to being a physician. If the education is proper, the real career development takes place in the operating room of conducting an orchestra and it continues for years, until you die. Abbado was working regularly and systematically for seven hours a day when he was 80-years-old. In short, an artist who has a solid background and is shaped with experienced following hard work can be a wizard like Abbado, not a just a maestro swinging the baton.

DS: You are going to conduct Mahler's Ninth Symphony at BİFO. Why did you choose this piece for the opening concert? Is there any special reason? As far as I know, you previously worked on it with Abbado.

AE: Mahler's piece is a turning point in my life. In December 2011, we gathered two orchestras to perform it at the opening ceremony of Florence's new opera hall. Abbado asked me to conduct the last rehearsal that was open to the public before the day of the concert. Until that time, I acted as his assistant. We worked together on four different projects. Following the concert, he asked me to work with him from December 2011-2016. I made my choice based on the thoughts aroused by Mahler's symphony while listening to it. The piece underscores the "end" and "death" while saying that nothing lasts forever. Mahler's music also says the beginning, the end, a specific point of time and infinity can all exist together.

DS: What do you think about the perception of classical music in Turkey and among the Turkish audience?

AE: It's full of surprises, changing and colorful, but the world has also changed. You can easily access the music or the video that you want to listen to via the Internet. This also helps the interested audience enhance their background and create a conscious awareness about classical music. Unfortunately, many concerts and performances do not take the public as their first priority due to competitiveness. Coordination and reciprocal dialogue between rival organizations are very weak as well. The low attendance rates of classical music performances is an international issue. The audience should be trained even when they are in primary education. Different practices have developed abroad and they are now being tested.

DS: What are your future projects? Are there any special concerts?

AE: I am planning to take part in different projects, all of which will develop cultural interaction between countries. Following the BİFO concert, I will go to Brazil on Nov. 2 and then conduct in Belarus. Marking Christmas celebrations, I will conduct Mozart's "The Magic Flute" at György Solti Hall in Budapest where I performed at its opening ceremony last year. I will have other concerts in Turkey in the early months of 2015. Next May, I will give the opening concert of the Brahms Festival in Germany and I have been invited to the Schleswig-Holstein Festival as well.

* İş Sanat contributed to this article