Fado is not just a musical style, but an emotion Mariza 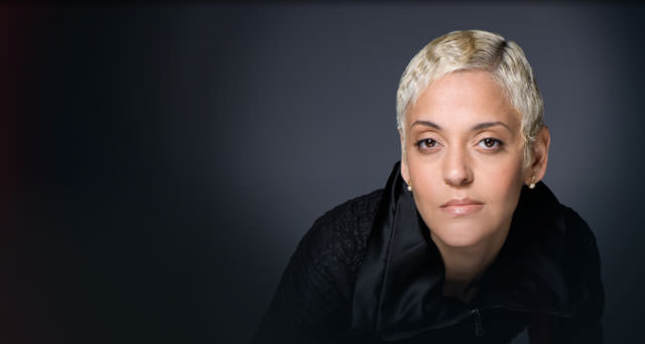 ‘Fado is not just a type of music but an emotion. It is not upsetting, it is melancholy. I did not choose this music; it was my fate...’

Dubbed by the British newspaper The Guardian as "The Diva of World Music,"three-time Latin Grammy Award Winner and the No. 1 representative of Portugal's famous melancholic Fado music with album sales of over 1 million, Mariza will take the stage at the M.E.B Şura Salon in Ankara on Nov. 6 and at the Cemal Reşit Rey Concert Hall in Istanbul on Nov. 7.

After beingcrowned Portugal's premiere Fado musician with the BBC's Best European Artist Award three times in a row, Mariza has been known as the greatest Fado artist since the legendary Amalia Rodrigues who created a modern interpretation of the Fado tradition and was the focus of vast attention all over the world.

Mariza will perform in Ankara and Istanbul as part of her world tour that includes countries in Asia, Africa, North and South America and Europe, which she has embarked upon to introduce her album "Best of Mariza 2014." Mariza reached millions with her latest performance at the Champions League final in May.

Mariza, who is referred to by the Portuguese government as the artist that best represents Portuguese culture abroad, tells us of Fado music, her songs and the audience she envisages in Turkey.

The famous newspaper The Guardian has declared you "The Diva of World Music." Is this a burden for you?

Mariza: Making music is always a great responsibility. When you make music you share your feelings, and this always brings responsibility with it. However I never sing my songs with any plans or with these in mind, I just say what I feel, nothing else.

Fado songs are generally full of sadness and grief. What can you say about your mood on stage?

Mariza: Music takes me away and all I do is follow it. Like a lover, a boyfriend, it draws me to it. All I do is use my voice as a small vehicle - it is the melodies and songs that blow me and my audience away.

You became the first Portuguese artist to receive a Grammy Award. What kind of emotions were you greeted with when you returned home with your awards?

Mariza: By being nominated for such a prestigious award, I was already a winner. What I told everybody in Portugal was that to be accepted in this way as a Fado artist was more important than actually winning the award, but of course winning the award and returning home with it made everybody happy.

As the daughter of a family who ran a Fado tavern, you were born into Fado. What did Fado make you feel at that age?

Mariza: I grew up among people who lived very traditional lives. Music was always very magical to me. Of course I was unaware of the things that Fado said. To me, singing meant Fado. Perhaps I was not even aware that I was in love with Fado, but I truly adored it.

Your success and voice has always been compared to Amalia Rodrigues. Which contemporary artists are you fond of?

Mariza: There is only one Amalia Rodrigues. She is unique and will always remain that way. However, it is a great honor to be compared with her. I travel so often that I cannot say that I follow new artists, particularly because I listen to old songs and traditional Fado. What I do know is that many contemporary artists sing Fado.

You add piano, strings and even African inspired percussion to your Fado songs. How would you define your Fado?

Mariza: Amalia Rodrigues used to do this too. I have approached music with this innovative approach since my first album. Carlos do Carmo, one of the legendary Fado names, also used to produce great music like this. In particular, since my album "Terra," we have travelled for years and added new things we have learned about various cultures to our songs and music with a different variety of colors. As I change throughout the years, so does my music.

You are known for your melancholic Fado songs. Do you listen to popular music in your daily life to balance your mood?

Mariza: Of course I do, but I generally prefer traditional African and Brazilian music because this music lies in my roots. The Pasion Turca group I work with always gives me Turkish albums as gifts. However, although Fado music moves me away from my personal mood, as I have been singing Fado since my childhood, it does not necessarily make me melancholy.

You are regarded as the only diva in the arena of world music. If you were to perform a duet with a famous pop star, who would you want it to be?

Mariza: John Mayer would be great. One of my favorite male pop vocalists is John Mayer. I think I would most like to sing with him. I am trying to consider who else I would enjoy performing a duet with, but I think my answer would be John Mayer again.

Most Fado songs are songs of deep longing. Is there a Fado song that has a story that truly touches you?

Mariza: This can be any song from my albums because I select them with care, I love all of them, they each have their unique stories and are each very special. Choosing just one among them all is like asking a mother to choose which of her children she loves the most.

Is there a song you like to sing when you are at home doing work?

Mariza: "Fadista Louco," which we recorded as part of Javier Limon's project "Mujeres De Agua," is just as you describe a song I always sing at home. Javier gave great importance to sincerity in his project. In my view, the best way to express our soul and to communicate our feelings is to sing. "Fadista Louco" tells the story of a singer who sings with his heart and is one of my favorite songs. The singer tells us of how crazy his heart is.

You will be giving a concert in Ankara on Nov. 6 for the first time, and then you are in Istanbul on Nov. 7. What kind of audience do you imagine in Turkey?

Mariza: I know that Mediterranean people express their feelings with joy. In particular, Mediterranean people use body language very effectively. The sorrow and melancholy of Fado is very deep and I believe the audience in Turkey will deeply experience the emotions of all of the songs.