Haris Alexiou emphasizes friendship of Turks and Greeks before concert 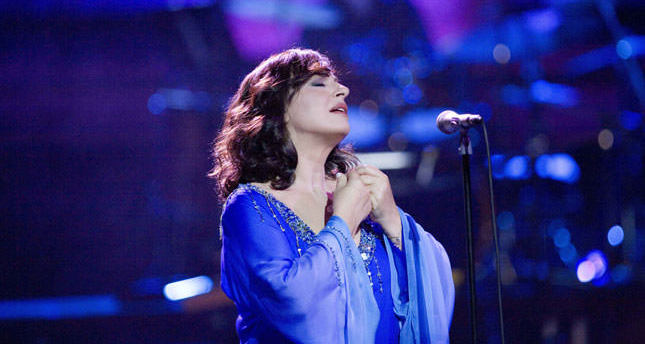 by AA Nov 07, 2014 12:00 am
Haris Alexiou, the diva of Greek music, will perform tomorrow at the Istanbul Congress Center as part of the Fifth Avea Extraordinary Music Concerts and sing some of her classic songs in a new style. The artist's repertoire will include her old songs as well as new ones. Alexiou, who has given several concerts around Turkey, spoke to Anadolu Agency (AA) before her concert.

Continuing preparations for her Istanbul concert, Alexiou said she is very excited to perfom for a Turkish audience and that Greece and Turkey have "so much in common." She added that Turks and Greeks lived together for a long time and this is reflected in both nations' music. "If politicians could be like us, there would be no problems between Greeks and Turks. It is funny that although the nations live together peacefully, there are political problems between them," she said. She explained that the closeness of Turkish and Greek culture is evident in their music. "Maybe the tension between these nations works for some politicians," Alexiou said, arguing that the problems that exist between the two countries have not been solved because of this. She said music cannot solve political issues alone and continued, "Music can only pull two nations together; however, maybe the new generation can find solutions for these problems. I have visited Turkey many times and each time people have welcomed me warmly." She added that she has roots from İzmir.

So far, Alexiou has 30 platinum and 13 golden records. She is known worldwide for her rembetiko and Greek folk songs. The artist is the original performer of songs that are adapted to Turkish and performed by many singers and groups from Sezen Aksu to Yeni Türkü. Alexiou is also familiar with songs from İzmir as her family migrated to Greece from İzmir.