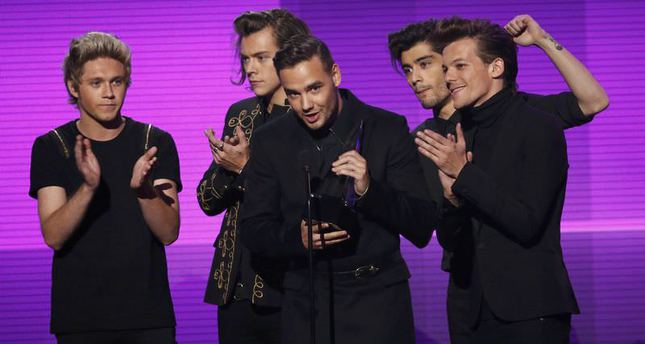 by AA Nov 24, 2014 12:00 am
British boy-band revivalists One Direction dominated the American Music Awards on Sunday night, winning three honors including "Artist of the Year."

"It has been a real perfect day for us. America feels like a second home to us," group member Liam Payne said onstage. He also thanked the band's U.S. record company, Columbia.

Formed in 2010 in London, the band became the first British act to debut on top of the Billboard 200 list when their 2011 album Up All Night sold over 176,000 copies during its first week of release in the U.S.

Singer Katy Perry, who missed the show, as she was on tour in Australia, also took three honors, including "Favorite Female Pop/Rock Artist" and the single of the year for "Dark Horse," a track that also features Memphis hip-hop icon Juicy J.

Another highlight of the competition was Australian rapper Iggy Azalea, who led the nominations with a total of six, including artist and single of the year for her smash hit "Fancy."

She won in the categories of "Favorite Rap/Hip-Hop" album and artist. The 24-year-old newcomer beat out critically acclaimed rap sensations Eminem and Drake to win the latter award.

Other winners of the night included Beyonce, John Legend, Imagine Dragons, Carrie Underwood and 5 Seconds of Summer, which was honored as the new artist of the year.

Created in 1973 as an alternative to the Grammys, the American Music Awards contest is based on a popular vote by fans rather than chart data, which indicates sales.