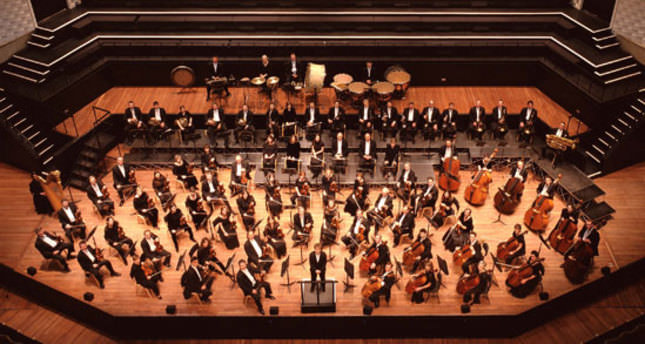 by AA
Nov 26, 2014 12:00 am
Founded by conservatory students and talented youngsters in the Tepecik district of İzmir where a large Romani community resides, the Tepecik Philharmonic Orchestra will perform Mozart symphonies with a different style. Well-known percussionist Hamdi Akatay, who also conducts the orchestra, said the project is a world first and their aim is to perform at international Mozart festivals. In his remarks to Anadolu Agency (AA) before the orchestra's very first performance "outside of the neighborhood" on Nov. 22, at the Selahattin Akçiçek Cultural Center, he said he returned to the neighborhood he was born in after working with renowned artists in Istanbul for 30 years. He added that he focuses on the East-West synthesis in his musical projects.

Under Akatay's leadership, the orchestra was founded by talented young people from the neighborhood, six of whom are conservatory students. Akatay claimed that the orchestra's Romani performance style of Mozart's symphonies is unique. He said integrating Romani melodies with Mozart's works is very challenging and they were not able to cover some parts of the symphonies, although they tried very hard. "The young people in the orchestra are very talented," Akatay said, praising his students. He continued, "This is a social project. The crime rate in Tepecik is very high and our intension is to keep the youngsters away from trouble, especially drugs. We are trying to teach them how to be worldwide musicians."

The orchestra rehearsed in the garden of the coffee shop located in the neighborhood before their first performance. During their concert, the Tepecik Philharmonic Symphony played Mozart's Symphonies K. 16, K. 25 and K. 40 and performed parts from K. 39 and K. 41 as amedley. Moreover, the orchestra has drawn attention from all over the world. "Our biggest aim is to play at the Mozart Festival in Salzburg and we have made the necessary applications," Akatay said. Niyazi Emre Şenyaylar, one of the violinists in the orchestra, said they were born into music in Tepecik. Although young musicians learned Western music while attending the conservatory, they never had the courage to play Mozart with the instruments they had until they participated in Akatay's project. The organizer of the project, president of Tepecik Culture Art Education Association, Dilan Keyvan, said they have founded three orchestras including the Tepecik Philharmonic Orchestra to keep the young people of Tepecik off drugs through music. She added that they want to maintain the orchestra's success with their other two orchestras on the international platform. The Tepecik Philharmonic Orchestra is composed of violinists Niyazi Emre Şenyaylar and Oğuzhan Yeter; second violinists Sedat Atlan, Resul Kara, Arif Gülfidan; Nejdet Bürücüler on the viola; cellist Osman Güngördü, percussionists Hamdi Akatay, Memduh Akatay, Koray Celme, Tolunay Şenyaylar, Burak Dunar; clarinetist Eden Mert İlbey, keyboardist İbrahim Yeter and Muzaffer Şenyaylar on the zither.