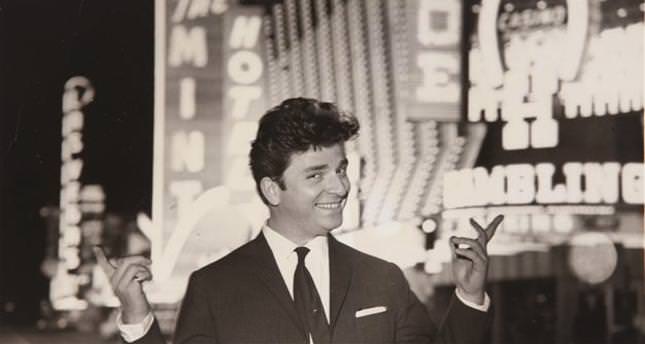 Curated by Derya Bengi and coordinated by Veysel Uğurlu, the “Here I Am, Zeki Müren” exhibition takes a fascinating look at the life of Turkish classical music icon Zeki Müren

When Lady Gaga released a new single called "Applause" in October last year, her careful fans pointed to a striking similarity between its cover image and a picture of Zeki Müren, the legendary Turkish singer and actor. Often referred to as "the Liberace of Turkey," Müren was one of the most unique talents of his generation. In his outlook he was as daring as Lady Gaga, wearing extravagant dresses and challenging the conventions of society. A new exhibition at Yapı Kredi Culture Center in Beyoğlu celebrates Müren's legacy with rare photographs, personal letters and objects. Curated by music writer Derya Bengi and coordinated by Veysel Uğurlu, deputy manager of Yapı Kredi Culture and Arts, "Here I am, Zeki Müren" brings us closer to the life of a fascinating cultural figure.

"Those who want to understand Turkey's sociology should visit a Zeki Müren performance at a music hall," Turkish writer and translator Sabahattin Eyüboğlu famously said. Visiting the exhibition on a Wednesday morning last week I was reminded of those words and was surprised to see how fascinated the visitors were. Dozens of elderly ladies were carefully inspecting letters of his mother, Hayriye Müren. Constantly referring to her son as "canımın içi biricik yavrum" (my one and only, darling son), she compares him, in one of her letters on display, to "an angel who had been brought to this earth from the Moon by the Apollo 11 spaceflight."

The idea for organizing a Zeki Müren exhibition came from Bahattin Öztuncay, a board member for the Turkish Education Foundation and the artistic advisor of ARTER. "We got permissions from the TEV and TSK Mehmetçik Vakfı," Veysel Uğurlu told me, describing the archival research for the exhibition. "Those two organizations were in possession of numberless original photographs and material that filled 15 trunks. We then started looking for a curator. I had really enjoyed Derya Bengi's exhibition about the 1960s Turkish music scene in Depo. Bengi was excited to see the material on Müren and this is how we started working together. After carrying those trunks to our building in Galatasaray, we worked for months on the thousands of photographs, agreements, correspondence and records that they contained. Our excitement grew with every piece of new information Bengi unearthed."

Uğurlu and Bengi realized that most of the material had came from Müren's house in Levent. "We organized the material chronologically and then selected the best items. Finally, we set up the exhibition and prepared the catalogue." They collaborated with Sadık Karamustafa, a familiar name in Yapı Kredi's exhibitions. "The work he did for this show was better than all his previous work during the last decade," Uğurlu said. "Thanks to his design, the contents of the exhibition are perfectly presented to the audience."

Apart from photographs and letters, the exhibition provides visitors with the opportunity to see Müren's exquisitely designed stage dresses, shoes and accessories, on display on the top floor. There is a small film theater, named the Zeki Müren Theater, where you can spend a few hours watching classic scenes from Müren films. When I visited, the theater was half-full and a lady dressed in fur had dozed off on one of the front seats.

"We were expecting to see lots of visitors," Uğurlu said. "But we were not expecting to see so many young visitors. On the first day we had 800 visitors. On Saturday 1,330 people came to visit. On Sunday there were 1,450 visitors in just six hours. Art galleries have around 300 visitors per month, so this is quite big. It shows that people not only admire and love Müren, but also miss him." Müren had decided to become a star early in his life, spending his teenage days going to concerts and thinking about ways of improving stage performances. Unlike other singers, who only focused on their singing, Müren was keen on putting on a great show. "Throughout his career the spectacle element of his performances increased gradually," Uğurlu said. "He was the first Turkish singer to use special effects and props on stage. All this artistry culminated in his Prince from Space costume (a mini dress), which is on display in our exhibition."

When Müren died in 1996, aged 64, there was shock and disbelief among his fans. Turkey's "Artistic Sun" ("Sanat Güneşimiz"), who once seemed immortal, was gone forever. But even in his exit he put on a show: Müren died on stage.