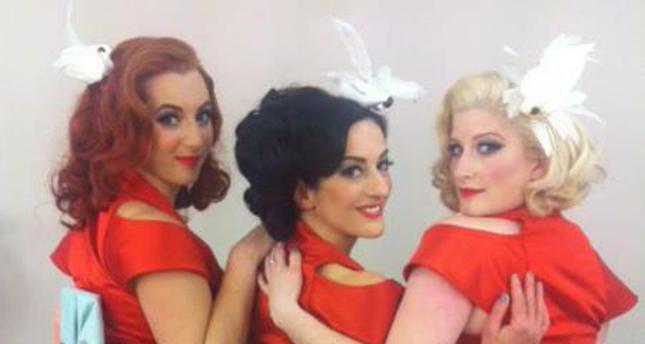 by Cenk Erdem Dec 18, 2014 12:00 am
The Puppini Sisters stand out with their 1940s Hollywood style, and their nostalgic, entertaining and romantic performances. The group does not only perform swing songs, but also classic pop songs such as "I Will Survive" by Gloria Gaynor, and modern pop songs like "Crazy in Love" by Beyoncé. With their rocking New Years' songs, the Puppini Sisters will enchant Istanbulites on Dec. 20th and 21st at Akasya Acıbadem. Formed almost 10 years ago, the Puppini Sisters create a nostalgic atmosphere on stage with their repertoire dominated by the songs of the 1930s and the 1940s, as well as their costumes. Daily Sabah spoke with Marcella Puppini, the founder of the Puppini Sisters, about the group, which saw a huge surge in popularity after collaborating with Michael Bublé on his Christmas album.

Daily Sabah: The name of your band is a tribute to a legendary band of the period, the Andrew Sisters. Can we say that they inspired you?

Marcella Puppini: Our debut single "Boogie Woogie Bugle Boy" is their song and one of the many songs that inspired us. The Andrew Sisters is a band that does not only give inspiration to us with their songs, but also many well-known musicians like Bette Midler. Christina Aguilera used melodies from "Boogie Woogie Bugle Boy" in her single "Candyman."

DS: Some describe your musical style as swing-meets-punk; do you agree?

MP: The swing-meets-punk description is absolutely true, especially for our live performances. However, we cannot say that our musical style is as tranquil as that of swing bands. We love to make jokes on stage, dance and communicate with the audience. We can be considered as enthusiastic as a swing-pop band.

DS: What are the other things that inspired you while you were creating your style?

MP: I always had a passion for singing in harmony. We used to sing Italian songs with my siblings. Actually, I loved bands like Manhattan Transfer, but the costumes of the swing-pop era always attracted me as well. In fact, I studied fashion before I enrolled in music school and I was even working with Vivienne Westwood. I guess, except for the music, the fashion of that period appealed to me the most.

DS: Apart from the music of the 1940s, what do you like most about the era?

MP: The 1930s and 1940s feel so nostalgic and romantic. Singing on stage is a little bit like theater. Creating an atmosphere with your costumes is also important to me, and that period features this. However, the fairytales that were created by Hollywood and the joyful songs despite the war and everything happening in real life also attracted me.

DS: How did people around you react when your songs were featured in the popular TV series "Grey's Anatomy?"

MP: "Grey's Anatomy" is very popular among my friend circle. Of course, hearing our songs on television made us happy, but personally I cannot say that I watch the series. Nevertheless, I received great reactions from my friends as well as Kate, one of our performers, since she is a fan of "Grey's Anatomy."

DS: I know that you previously wore Vivien Westwood designs in your music videos. What do you wear when performing?

MP: I design some of the costumes I wear when we perform. Right from the beginning, we valued our costumes and the attire reflected the swing period. We are collaborating with different designers for our stage costumes, but as I said before, we are performing largely with my own designs.

DS: If you were to pick a well-known pop star to perform with on stage, who would you choose?

MP: Since we do not have a vocalist with pink hair, Nicki Minaj would be great. Honestly, I really like her. Although she changed her style as her popularity increased, she is a very innovative artist, especially if you have time to check out her early career. She used to rap between the songs and it was great.