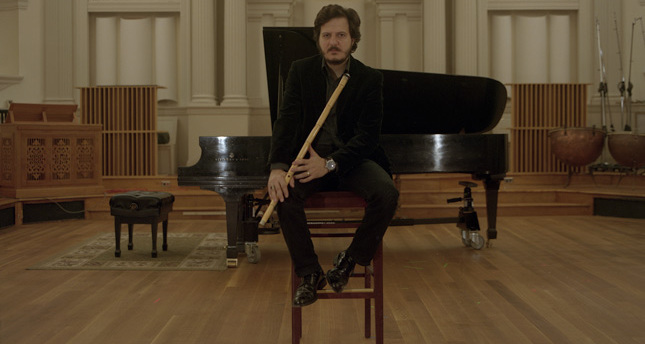 by Daily Sabah Dec 18, 2014 12:00 am
The album, "Dreams and Prayers," by the Boston-based orchestra A Far Cry, featuring Turkish composer and ethnomusicologist Mehmet Ali Sanlıkol's piece "Vecd" (Ecstasy), was announced as one of the five finalists for the Grammy Awards in the category of Best Classical Chamber/Small Ensemble Performance. Two-and-a-half years ago, Sanlıkol was commissioned to create a composition for the string orchestra, which was going to give a concert with a focus on spiritualism. His composition reflects Islam, music and spirituality. Upon its big success, "Vecd" was released on the orchestra's album "Dreams and Prayers" in September. His was the only piece from the album to have a world premiere.

"The orchestra asked me to compose a piece about spiritualism and Islam and it was performed along with [pieces by] Jewish composer Osvaldo Golijov, Beethoven and Hildegard von Bingen's compositions on the same subject. I decided to compose [type] Sufi music, the first thing that comes to mind when talking about Islam, music and spiritualism in Turkey. The premiere of "Vecd" took place two years before," Sanlıkol said. He went on to say that "Dreams and Prayers" features four songs in total. "Two days ago, the album was nominated for a Grammy, and the Boston Globe daily mentioned my name among other nominations from Boston," he added. Sanlıkol expressed his happiness and pride for being among the legendary composers on the album and announced as a finalist with A Far Cry.

Sanlıkol was taught classical piano by his mother, Fethiye Sanlıkol, and started his piano recital performances at the age of five. Until 1992, he performed classical and contemporary music and took private courses from renowned Turkish composer and jazz pianist Aydın Esen. Sanlıkol won a scholarship to Berklee College of Music. In his first year, he was selected to enter influential American jazz trumpeter and educator Herb Pomeroy's class from among 3,000 students. Sanlıkol went on tour with the Berklee Band in the U.S. and Turkey in 1996. One year later, he founded AudioFact, a modern jazz group with Onur Türkmen and performed in Mexico, Argentina, the U.S. and Europe. The same year, he received the Berklee College of Music's Clare Fischer Award and completed his degree in jazz composition and film scoring. In 2000, he graduated from the New England Conservatory of Music with a master's degree in jazz composition. His group performed in the Istanbul International Jazz Festival and was named the festival's "best music group" by Mike Zwerin and Bill Milkowski, two well-known critics for the New York Times and Jazz Times. Two years later he composed a cantata that was performed by the PALS Children's Chorus and a chamber orchestra featuring Turkish instruments in Boston. His piece received critical acclaim from the Boston Globe. In 2004, he received a doctorate of musical arts in composition at the New England Conservatory. In recent years, Sanlıkol has worked as a lecturer at Berklee College of Music and Tufts University.

In 2004 he founded a culture and arts foundation, Dünya, in Boston and began to organize concerts harmonizing Anatolian and Turkish traditions with other cultures. Sanlıkol still acts as the head of the foundation and actively takes part in concerts. He has released nine albums and one DVD with the institution. His other album "Kıbrıs'ın Sesi" (The Sound of Cyprus), which is the only project bringing the music of Greek and Turkish Cypriots together, was released on the Kalan Music label. After its success, Sanlıkol was invited on prestigious radio programs in the U.S. He currently teaches at Boston-based Emerson College and Holy Cross University and conducts post-doctoral studies at Harvard University. He has worked with many Turkish and international names including Bob Brookmeyer, Horacio "el Negro" Hernandez, Tiger Okoshi, Esperanza Spalding, the Boston Camerata, Okay Temiz, Ömer Faruk Tekbilek, Erkan Oğur, Yansımalar, Fahir Atakoğlu, Burcu Güneş, Nil Karaibrahimgil and Edip Akbayram. His book titled "Çalıcı Mehterler" (The Musician Mehters) was published in English by ISIS and its Turkish version was released by Yapı Kredi Publishing in 2011. Sanlıkol attends academic conferences and consults the exhibition on Turkish music in an American museum that showcases a wide range of musical instruments.