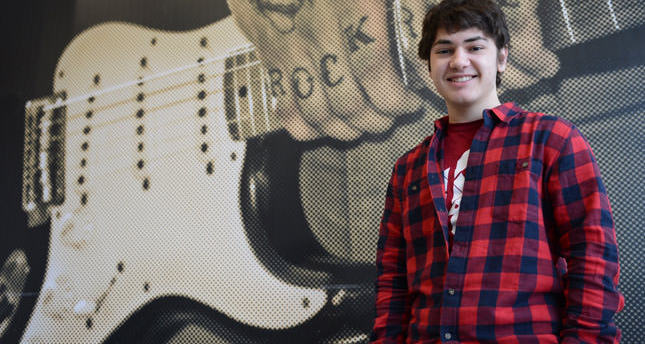 by Daily Sabah Jan 08, 2015 12:00 am
Regarded as the "genius of the future" by music authorities, 17-year-old pianist Tambi Asaad Cimuk migrated to Turkey from Syria with his family two years ago and settled in Bursa. The brilliant young musician will play Palestinian melodies at an event hosted by the Presidency in the honor of Palestinian President Mahmud Abbas.

Cimuk assumed Turkish citizenship on December 9, 2014, with a decree that was signed by President Recep Tayyip Erdoğan when his talent was discovered. In his statement to an Anadolu Agency (AA) correspondent, the young artist said that Erdoğan personally invited him to the event, which will take place this month.

Cimuk said that he is looking forward to giving a concert during the event, and added, "I will play classical and Turkish music. I would also like to play 'Katibim' [an old classical Turkish song] at the event." He also mentioned that there is little time left to prepare for the concert. "I will work hard for the event. If I could talk to President Erdoğan during the event, it would be great."

Giving a reminder that he attended a music competition in St. Petersburg, Russia, Cimuk stressed that he learned so much from this experience. The pianist also said he will participate in another music competition in Germany in March. "I will play classical music and German melodies. I have to work hard to become successful. I want to enroll in the Department of Piano at New York University Conservatory, but I need to practice more. The future will be great."