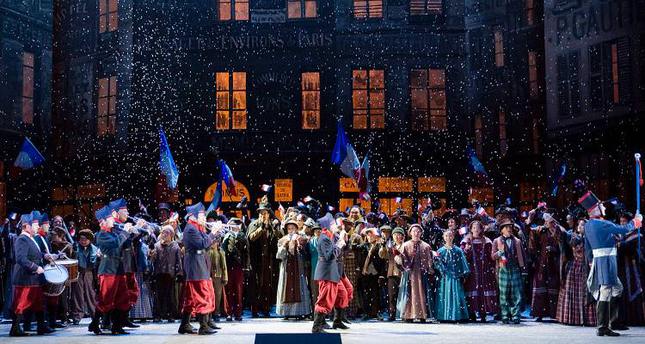 As one of the most enjoyable operas ever written, Italian composer Giacomo Puccini’s ‘La Boheme,’ will offer a visual and melodic treat with its international cast in Istanbul for a week

It is a freezing Christmas Eve in Paris. A group of impoverished Bohemian artists are living in a shabby attic. Rodolfo is a poet and playwright who stays with his three roommates - Marcello, a painter, Colline, a philosopher, and Schaunard, a musician. The landlord persistently asks for the rent, and although there is some food at home, the young group is determined to indulge themselves and celebrate Christmas in the Latin Quarter.

The Parisian "Bohemia" of the 1930s comes to the stage for a week at Istanbul's Zorlu Performing Arts Center with Italian composer Giacomo Puccini's opera "La Boheme," blending uplifting music with the story of struggling people. The famous composer draws a portrait of artists and intellectuals who turn their back on the conventional structure of social organization and traditions, while pursuing something new and living flamboyant lifestyles, which can theoretically be described as "bohemian."

Making its world premiere in 1896, the grand opera was adapted from French author Henri Murger's set of short stories "The Bohemians of the Latin Quarter," initially published in a newspaper and then as a book. The characters devote themselves to pleasure and freedom, although they are living in slum conditions. Avoiding any comforts of the bourgeoisie, they paradoxically return home after spending excessive amounts of money.

The four-act tragedy mostly focuses on the love affair between Rodolfo and Mimi, a poor seamstress knocking on her neighbor's door for a candle. Mimi and Rodolfo talk to each other in Rodolfo's house, and when Mimi is about to leave, she realizes that she has lost her key. "A lost key and an accidental touch of cold hands in the dark - so begins one of the great romances of all opera," describes the Royal Opera Puccini's work. As the story moves on, the audience finds out Mimi is dying of tuberculosis and Rodolfo is unable to look after her. The two attic dwellers have no other choice, but unwillingly break up.

Opera basically combines music and drama, yet there is one other component that allows us to describe it as visual art, that is, stage design. Those who regularly go to musicals or the theater know that costumes and background design are the element that creates a believable world on stage. Prior to "La Boheme," the following section from the Royal Opera House's critique will satisfy our curiosity: "As the curtain rises for each of the four acts we see a tableau of lifelike clarity. The attic of the [artists] in Acts I and IV has bare floors, a stove, basic wooden furniture; and the bohemians huddle against the cold that you can almost feel whistle through the pokey windows. Act II splendidly uses three levels and a split across the stage to give a panoramic sense of a Parisian bustling street outside and the inside of the Cafe Momus - complete with waiters, food and billiard table. Act III outside the Barriere d'Enfer (a gateway into Paris) has the railings, a parked cart with its load - and snow for a cold morning at dawn." Leaving aside the well-constructed stage design, more than 200 costumes have been prepared for the upcoming event. As one of the most widely performed operas around the world, "La Boheme" vividly represents Puccini's operatic perspective, "great sorrows in little souls," which is also the secret behind his success. Luigi Illica and Giuseppe Giacosa wrote the opera's Italian libretto. La Boheme is produced in association with the London-based Royal Opera House. Audiences will be greeted by a very colorful stage cast under the directorship of Richard Gerard Jones - Turkish soprano Simge Büyükedes (Mimi), Chinese baritone ZhengZhong Zhou (Marcello), powerful British tenor David Butt Philip (Rodolfo) and New Zealander soprano Madeleine Pierard (Musetta). The award-winning Boğaziçi Jazz Choir under the baton of Masis Aram Gözbek, and the local orchestra accompanied by conductor Cem Mansur will be ready to enchant opera enthusiasts. Zorlu PSM will host La Boheme from Jan. 18-24.