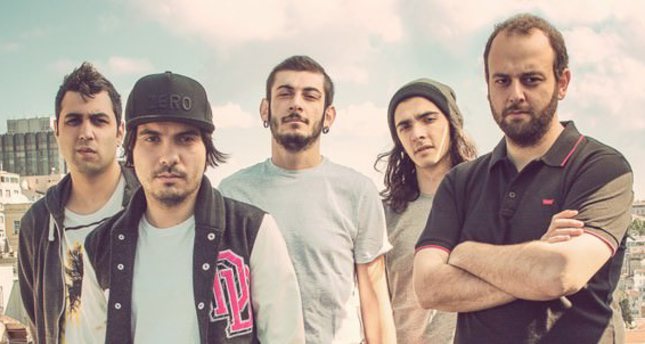 Evden Uzakta is a flourishing Turkish pop punk group. Its five members recorded their debut album in the U.S. and will give a concert next week in Istanbul

The rock band Evden Uzakta (Away from Home) has been making energetic music for the last two years. Released by We Play, Evden Uzakta's album "Hiçbi' Yere Doğru" (Going Nowhere) presents a fine mixture of the punk and pop genres. The band will give their launch concert on Jan. 20 at Roxy. Paul Leavitt, who works with American punk-rock bands, is the producer of Evden Uzakta's album. The band, which recorded their album in Baltimore, shot their first music video for the song "Dün Gece" (Last Night). "Hiçbi' Yere Doğru" is a very good album with a good track list including a rock cover of the famous '90s dance song "Missing" by Everything but the Girl. The band features vocalist and guitarist Kerem Brumend, bass guitarist Can Şahin, keyboard player Batuhan Bükücü, drummer Emre Kara and guitarist and backing vocalist Serhat Sevinç. We spoke to Kerem, also a songwriter, about the story of the band, how they kicked off their musical journey and their songs and upcoming projects.

DS: How did you come up with the idea of working with Paul Leavitt who is known to work with American punk-rock bands such as Yellow Card and All Time Low?

KB: While making music, Serhat and I ran a recording and rehearsing studio called Rx Studios. We used to sit for hours searching for the names of the producers and recording studios of our favorite bands. I began to search every little detail of almost every album that I liked. We thought about working with Leavitt after listening to The Dangerous Summer's album "Reach for the Sun."

DS: You recorded your album in Baltimore; so how can you describe your music?

KB: Instead of instrumental songs, we wanted our songs to be simple but melodic, plain but strong and catchy. I have never used cool-sounding lyrics in a song if they did not mean anything for me. I play even the simplest riff if it makes me happy. Everything I wrote has a story.

DS: The name of your band is Evden Uzakta; who chose this name?

KB: One day, Serhat and I were going to Taksim from Beşiktaş. At that time, the name of our band was "Vanilla," but we wanted to change it. While I was driving, the traffic signs caught my attention. Suddenly, I turned to Serhat and said, "What if we named our band 'Evden Uzakta." It just came to my mind.

DS: How long you have been together as a group?

KB: We have been making music with Serhat under different names since 2002, but Evden Uzakta was professionally founded in 2012. I can say that our band is very young and fresh.

DS: Your album features a rock cover of an Everything but the Girl song from the '90s. Why did you choose the song "Missing" among other dance classics of the 90s?

KB: Everybody who was a child toward the end of the '80s and the beginning of the '90s remembers this song. Actually, arranging a cover of "Missing" was the idea of my roommate, while I was in the U.S. I was listening to the song over and over again, and my roommate asked me why I had not yet covered the song. I stumbled at first. It took us one-and-a-half year to put it into its final form, but I believe it was worth it.

DS: The opening track of your album is "Hoşçakal" (Goodbye) which is a highly energetic song. Can we say that you are also a music band full of energy?

KB: Yes, generally the metronomes of our music are very high. "Yıldızlar" (Stars) and "Her Şey Yolunda" (Everything is O.K.) are the only slow tracks on the album. Except for these two songs, we have very energetic songs. Sometimes, we lose ourselves and start to play so fast that one of us interrupts the rehearsal and says, "Slow down a bit."

DS: Rock music is very popular among university students in Turkey. Which one of your songs do you think appeals to the youngsters?

KB: I believe that young people will love "Hoşçakal" (Good Bye), "Yıldızlar" (Stars) and "Affet Beni" (Forgive Me). However, it is impossible to determine this beforehand. You may see there are Turkish and foreign bands that say that they made a breakthrough with songs that were the least expected to succeed.

DS: As a Western-style rock band, which bands in Turkey influence you the most?

KB: Unfortunately, there are few bands in Turkey that can make mainstream rock music. When I started to make music, this number was even lower. As I graduated from the German School of Istanbul, I knew Mor ve Ötesi from festivals held at my school. It was pretty impressive for a child of my age to see people whom I went to school with, founding a band. I was inspired by Turkish bands such as Kurban, Raşit and Athena when I was interested in music as an amateur.

DS: What can you say about the emotional tone of your songs? Who wrote the lyrics?

KB: Most of the lyrics and the compositions belong to me. I wrote most of them while I was a student in the U.S. Living far away from home can lead you to become melancholic. During that period, I was inspired by my inner world instead of what was happening around me. The songs can be a little bit personal in terms of emotions. The emotions come from the dilemmas I experienced, and living away from home shaped my writing.

DS: You shot a music video for your song "Dün Gece" (Last Night) - what is next?

KB: The music video for "Hoşçakal" is online. We worked with Onur Ayla, who is also my childhood friend, on the music video. You watch the video of "Hoşçakal" from the perspective of a small child. We plan to shoot a video for "Yıldızlar." We will also give our introductory concert on Jan. 20 at Roxy. You will hear more covers from the '90s from us. Moreover, we want to release an acoustic version of "Hiçbi' Yere Doğru" before the second album.