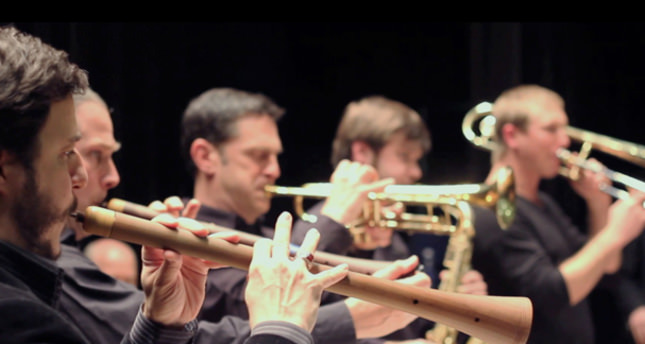 Music is a life-long passion for Turkish musician Mehmet Ali Sanlıkol, whose piece has been nominated for a Grammy Award

The album "Dreams and Prayers" by the Boston-based string orchestra "A Far Cry," featuring Turkish composer and ethnomusicologist Mehmet Ali Sanlıkol's piece "Vecd" [Wajd in Arabic], was nominated for a Grammy Award in the category of Best Classical Chamber/Small Ensemble Performance. Sanlıkol won a scholarship to Berklee College of Music and graduated from the New England Conservatory of Music with a master's degree in jazz composition. He conducts post-doctoral studies at Harvard University and is a faculty member at Emerson College and at Holy Cross. Enjoying the opportunity to work with Turkish and foreign musicians and bands, Sanlıkol has appeared on stage all around the world, and has earned numerous awards. Besides his musical achievements, he published a book entitled "Çalıcı Mehterler" (The Musician Mehters) in 2011. Reflecting Islam and Sufism together, his work "Vecd" is the album's only piece that has had a world premiere. Daily Sabah asked Sanlıkol about his work, his Grammy nomination and the "mehter" ensemble (Ottoman Janissary band), which he describes as ceremonial Ottoman music.

DS: Let me first congratulate you on your Grammy nomination. Can you tell us about "Dreams and Prayers," which has taken you on the road to a Grammy? How did you come together with A Far Cry?

MS: The orchestra was founded at the New England Conservatory of Music. I gave many concerts there, and we knew each other. The group members consulted my colleague Robert Laberee, who is also one of my former lecturers and the co-founder of Dünya, just as I am. They said that their album would feature Beethoven, Hildegard and Osvaldo Golijov to represent Christianity and Judaism. They were looking for a composition on Islam, and Robert gave them my name. Upon receiving their offer, the first thing that came to mind was Sufism, which also caught their interest.

DS: Does "Vecd" have a special story?

MS: It has two main components, "zikir" [dhkir in Arabic] and "Sema." Zikir generally begins with long rhythms, gradually speeds up and repeats itself. During the speeding up of the ostinato, a hafiz [Quranic chanter] reads a devotional poem. This was the concept in my mind. There is also Sema with four "selams" [movements]. Each selam has a different tempo. They speed up and then slow down. Instead of improvisation, the melodic phrases creating my composition are reminiscent of a Sema ceremony.

DS: What does the Grammy nomination mean to you?

MS: The Grammy nomination is an important step in becoming a prestigious and respected composer, something I have been dreaming of since I was 14.

DS: Can you tell us a bit more about how you started in music?

MS: My piano lecturer mother was the first to encourage me in this field. At first, I played the instrument only because my mum is a music teacher. My passion was not triggered until I was 13. Music got my attention when I began to listen to Progressive Rock, Deep Purple and Led Zeppelin. When I started to explore the influences of classical music on them, I better comprehended the style of Mozart and Beethoven. I founded a music group at the age of 14 or 15 with my friends. Şebnem Ferah was in my next class. We gave our first concerts together, and she has now become an important rock singer. I was searching for something different and wanted to become a composer. I used to perform in a rock group, but wanted to compose a symphony. Two years later, I began to listen to jazz, and at 17, I went to Istanbul. I studied and performed music by my self and had limited opportunities in Bursa. When I was 18, I came to Boston.

DS: You entered into a new world after some difficulties.

MS: I was not a bright student at high school because I was always thinking about music. My father was tired of saying I should highlight my lecture notes while studying. Everything changed when I came here. Although I was still very young, I turned out to be Berklee's most successful student. I was doing what I wanted most.

DS: How did your interest in Turkish music develop?

MS: This was the second biggest change in my life. I did not have any interest in Turkish music at first. Indeed, for many years, I used to have an orientalist stance toward Turkish music. The real change came in the 2000s. I am fond of a conquest game called "Risk." One day, we were playing it with a few friends. One of my friends played mehter music to make it more enjoyable. Of course, we mocked it at first, but later, the music undid my prejudices. I focused on the game, but two pieces got my attention. I remember, one day I was lying in bed, but I was hearing music as if it was still playing. The day after, I discussed this with John Abercrombie, a jazz and guitar legend at school. I felt strange and was able to comprehend the beauty of mehter. I forgot about the ensemble's strange costumes and the handlebar moustaches of its members.

DS: Why do you think the appearance hides the quality of mehter music? Why do we have such perceptions in our minds?

MS: Orientalism... I believe if we sort out our relationship between ourselves and our identity, we will make peace with our past. We mention the Ottomans a lot these days, but how do we see them? Even though every decade of the Turkish Republic is different, we examine a 600-year-old history from a single window. There are some who are alienated due to their secular identity. I was one of them until I discovered mehter. One day, as I was in Turkey and about to return here, I realized I had been studying jazz and classical music for over 15 years, and so I would do everything to learn more about Turkish music. I was working very hard, collecting every CD on Turkish music. The archive of Kalan Müzik was very good, and I had the chance to discover hafizs. If the Ottoman language is to be mandatory at school, so "makam" should be in music classes, as there are now few people who know how to read Mevlid [a long poem commemorating the birth of the Prophet Muhammad.] If there is something called "Turkish Islam," Mevlids are the surest sign of its existence.

DS: You have a book about mehter. I believe this is the first significant academic study in this field since the 1960s.

MS: Haydar Sanal and Pars Tuğlacı have conducted comprehensive studies in this field. I can say my book is the most significant study after Sanal's. Mehter is ceremonial Ottoman music rather than military music. Although the music was associated with the battlefield, it is not just all about war. As a term, mehter refers to a high-ranked servant. There used to be unofficial mehter members who played at wedding ceremonies. They used to have many other duties as well, such as accompanying the sultan outside the palace, entertaining foreign ambassadors and giving concerts to people who were promoted and honored by the sultan himself. Today, their music has become simplified, and their repertoire only features heroic ballads. In this album, I played rare songs that are generally not played by mehter bands.

DS: Do you want to compose modern mehter music?

MS: Of course I do. I mentioned this in my book. The music notes of Mehteran-ı Hakaniye give some clues about the old repertoire of mehter. My book features a section about modern mehter bands and their techniques. I also wrote a few compositions and gave examples so that mehter can be performed at concert venues. I also appreciate mehter bands for tourist purposes. However, I find it wrong to turn it solely into a form of entertainment.

DS: What do you think about the ongoing discussions on the Ottoman language?

MS: It would be wise to discuss this issue in a broader context. While people are learning it, they should also raise consciousness and compare different opinions, allowing them to create tolerance. You may see cultural variety in Istanbul's history, for instance.

DS: How did you found Dünya?

MS: In 2004, I was about to finish my doctoral studies when I met my wife. I heard one of the works of a former classmate on national public radio and felt jealous of him. I asked my wife how I could give concerts at the university every month. She loved my idea, and we took the first step to create our organization. Of course, Robert Laberee joined us. Without my wife, Serap, our organization would not have achieved its current form.

DS: What are you doing as a group?

MS: We invite master Turkish and foreign musicians to our workshops such as Erkan Oğur and Brenna MacCrimmon. They are also featured on our albums. Dünya celebrates its tenth year with nine albums, one DVD album and one film. We have held over 100 concerts. We use our own efforts and have not received state funding except one for a project for Istanbul Culture Capital.

DS: Thank you for this enjoyable interview. I hope we will hear good news soon.

MS: Thank you. By the way, I was a candidate for Grammy nominations in three categories and was not really hopeful for "Dreams and Prayers" because it was released very late. I thought the jazz project "Whatsnext" would be given a nomination. Critiques spoke well about it, for example, in JAZZIZ, one of the three biggest jazz magazines in the U.S. What is more pleasing is that Michael Fagien, the leading critique of "Critics Choice 2014" put the album on his top-ten list.