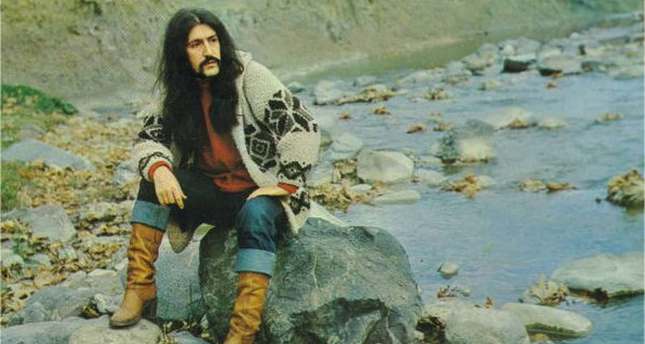 by Daily Sabah Feb 01, 2015 12:00 am
One of Turkey's most famous and beloved cultural figures, Turkish rock musician and composer Barış Manço was commemorated on the 16th year of his death over the weekend.

Manço, who died of a heart attack on February 1, 1999 at 65 years of age, is still remembered by his young and old fans alike. On Saturday, a group of 100 students from Üsküdar Municipality's Youth and Education Center paid tribute to the legendary singer at his grave in Istanbul's Kanlıca quarter. Melih Ekrem Say, 12, said he knows and sings Manço's songs, Anadolu Agency reported.

Aside from his younger fans, a commemoration event will take place at the Caddebostan Culture Center at 8:00 p.m. overseen by his wife, Lale Manço, and poet Sunay Akın. Legendary groups that backed Manço, Kurtalan Ekspress and Moğollar, both Anatolian rock groups, will perform Manço's well-known songs.

The Barış Manço Museum in the residential area of Moda opened for visitors until midnight on Saturday. The acclaimed musician's songs were interpreted in various languages ranging from English to Japanese. He was honored as the Turkish Culture Ambassador of Belgium in 1987, Turkish state musician in 1991 and received the Order of Chivalry in Art and Literature (1992) from France along with many other prizes.

Manço traveled around the world for his popular TV program "7'den 77'ye" (From 7 to 77) and attracted the interest of people in different countries for his personality and songs until his death.