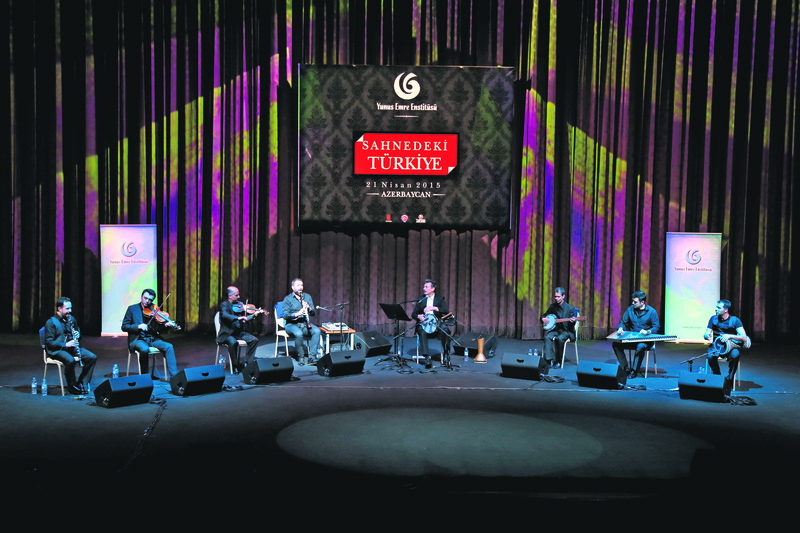 The Yunus Emre Institute hosted two of Turkey’s master musicians, Burhan Öçal and Hüsnü Şenlendirici, as part of its ‘Turkey on Stage’ program in Azerbaijan. Yesterday, the institution also marked National Sovereignty and Children’s Day with a colorful event in Bosnia and Herzegovina

As part of the Yunus Emre Institute's "Turkey on Stage" Project, percussionist Burhan Öçal and clarinetist Hüsnü Şenlendirici performed in Baku, the capital of Azerbaijan. The concert, in which some of the most precious examples of Turkish music were performed, took place on April 21 at the Baku Haydar Aliyev Palace.

Speaking at the press conference before the concert, Yunus Emre Institute Assistant Chairman Şaban Çobanoğlu said the institute holds cultural, artistic and language-related activities in 40 cities around the world, highly values multilingualism and multiculturalism and respects and honors all languages and cultures without discrimination.

Çobanoğlu added they have organized more than 700 cultural activities, mostly in Azerbaijan, and said Turkey and Azerbaijan share similar pains and joys on national holidays and other important days. Yunus Emre Institute Project Manager Haşim Koç said they are trying to introduce and promote Turkey with projects including "Revival of Traditional Handcrafts," "Rebuilding Cultural Heritage," "100 Libraries of Turkey," "Turkish Days in 7 Regions to 7 Continents," "History on the Sport" and others. Koç stressed that all concerts and stage performances will be performed as part of the "Turkey on Stage" project, and the project's main aim is to introduce Turkey's traditional and modern performance arts to international audiences. The Manager of the Turkish Culture Center of the Yunus Emre Institute, Ali Cura, underscored that Turkey's first official contact and high-level visits were made to Azerbaijan, thus the institute is trying to continue this tradition. 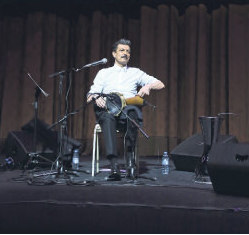 The legendary percussionist who currently divides his time between Istanbul and Zurich stepped into the world of music when he first arrived in Europe. With an enthusiasm for exploring new horizons in music, Öçal has been involved in crucial projects with many other leading names in world music.

Pierre Favre, one of the most important jazz musicians in Switzerland, was one of the leading names Öçal collaborated with in his early days, followed by world renowned Portuguese classical pianist Maria Joao Pires, Australian pianist Peter Waters and the Swiss jazz pianist George Gruntz, just to name few. His unique style and broad vision soon reached the U.S. after several concerts he performed around the world. The turning point in his career came when he meet Jo Zawinul, the creator of "Weather Report," as he then took part in Zawinul's symphonic jazz project for the next 10 years. Currently, Öçal is a frequent guest at the world's most renowned jazz festivals, including the Montreal Jazz Festival where he had the chance to perform before more than 150,000 jazz enthusiasts.

As far as eclectic tunes and Roma-style Turkish music is concerned, clarinetist Şenlendirici is the first name that comes to mind. Born to a Mediterranean family with Roma roots, he started his musical education at an early age and is now one of the best clarinet virtuosos in both Turkey and Europe. Şenlendirici, who also has a university degree, started his musical career at the age of 5 with his grandfather's famous band, "Lacho." Throughout his career, he has worked with various Turkish stars including Sezen Aksu, İlhan Erşahin, BaBa ZuLa and Mercan Dede. While he is a frequent guest at concerts of such renowned names, he soon formed his own band "Lacho Tayfa" and recorded and co-produced the album "In the Buzz-Bag" with the legendary Grammy winner and New York funk collective Brooklyn Funk Essentials.

A message of peace and freedom from Bosnia

The Yunus Emre Institute sent a message of peace and freedom to the whole world during a celebration event organized as part of the "Gönül Coğrafyamda 23 Nisan" (April 23 in the Geography of My Heart) program held in Zenica, Bosnia-Herzegovina. More than 5,000 students from different cities in Bosnia attended the celebration, which marked National Sovereignty and Children's Day yesterday. Striving to promote the values and beauties of the nation, the Yunus Emre Institute attracted the interest of Bosnian students during the Children's Feast, which took place at the Zenica Arena Indoor Sports Hall. The program was broadcast live on state-run Turkish Radio and Television Corporation's (TRT) Turkic and Balkan-focused channel "TRT Avaz," as well as by state and private television channels of Bosnia. The ceremony was overseen by representatives from the Bosnian government and other countries including Turkey. Various concerts, special performances, informative videos, folk dance performances and lotteries took place, and children had an unforgettable time. Children who are learning Turkish asked for peace around the world during the event. The celebration began with the national anthems of both countries as children waved national flags. A peaceful and friendly atmosphere was observed in the arena. The mayor of Zenica and the president of the Turkish Delegation Committee stressed the importance of peace and collaboration between the two countries, underlining the significance of children for a bright future. Additionally, the president of the Yunus Emre Institute said it is necessary to educate the engineers, teachers and physicians of the future. Bosnian children with leukemia presented gifts to Turkey's ambassador to Bosnia and Herzegovina, and a Bosnian folk dance team performed a traditional dance that originated in Turkey's Black Sea Region. Children with physical disabilities and Down syndrome also performed folk dances. The Bosnia-based Turkish institute, with whom Turkey has a strong alliance and historical bond, has made significant efforts to include Turkish in the curricula of Bosnian schools. There are 450 students studying in the Turkology departments of universities, and more than 100 students are continuing Turkish courses.

About the Yunus Emre Institute

With the various centers it has established all around the world, the Yunus Emre Institute is conducting educational and training projects along with organizing culture and art events. The institute, which also tries to support scientific research, currently has 30 centers abroad and offers Turkish classes to anyone interested in learning Turkish. Founded in 2009, the institute brings together leading names from the culture and arts world in various seminars, symposiums, conferences and panels organized around the world. In order to promote and introduce Turkish music, modern and traditional Turkish handcrafts, theater, cinema, photography, literature, Turkish cuisine and other aspects of Turkish culture, as well as to share the rich culture of Turkey with the world, the institute organizes concerts, exhibitions, workshops, performances, film screenings, scientific meetings, intellectual meetings, art courses and other similar activities and events. There are more than 5,000 students learning Turkish at the Yunus Emre Institute in Bosnia.
Last Update: Apr 24, 2015 1:59 pm
RELATED TOPICS