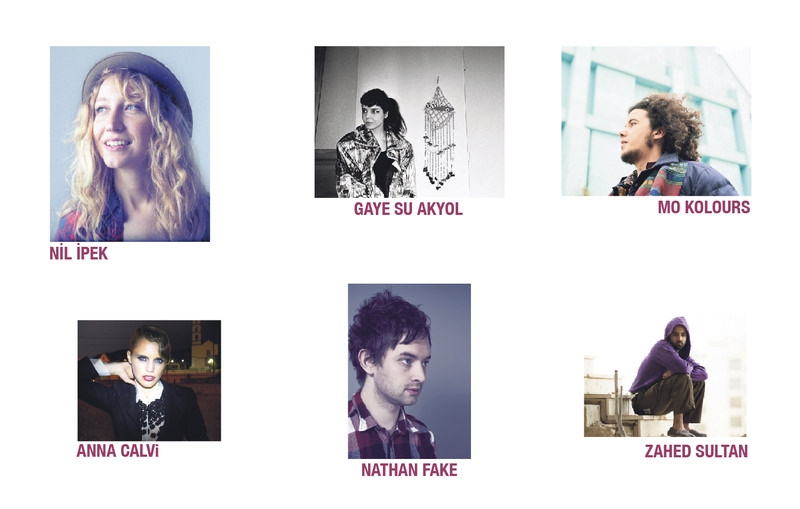 Bringing together many young talents from around the world, the Babylon Soundgarden Festival will take place in the natural environment of Kilyos beach on May 23. Musicians of various genres, from electronic music to hip-hop, will perform on four different stages throughout the day

British musician Anna Calvi spent her childhood listening to musicians belonging different genres and became familiar with a wide range of musicians from Maria Callas to the Rolling Stones. The artist, who has been compared to PJ Harvey and Siouxsie Sioux by some due to her voice and musical style, began playing the violin at the age of six and guitar at the age of eight. Having graduated as a violin virtuoso from university, Calvi released many singles at the beginning of her career. However, her star shone thanks to the Grinderman tour she went on with the legendary Nick Cave in 2010. A year later she launched her first album "Anna Calvi" featuring many fellow musicians such as Brian Eno, Dave Okumu and Emma Nathan. Regarded as one of the most talented figures in indie pop, Calvi later released her second album "Breath," which brought her a Mercury Award and her first EP "Strange Weather," which is composed of covers of old songs.

British Indie Rock band Wild Beasts broke into the music market with their 2006 single "Brave Bulging Buoyant Clairvoyants." Following their success, the band signed with Domino and released three albums named "Limbo, Panto", "Two Dancers" and "Smother." The band, which had their first important success with their second album that was nominated for the Mercury Awards, blends their innovative style and strong backgrounds with the tenor voice of their singer Hayden Thorpe. Wild Beats caused a stir in the market with their 2014 album "Present Tense."

Founded in Korpilombolo, Sweden, Goat received positive criticism with their debut album "World Music" in 2012. The band's music is affected by the geographical and demographical surrounding of the hometown of the band members, and their style features afro-beats, psychedelic rhythms, krautrock, funk and acid rock. Inspired by bands such as Can, Faust, Parliament and Incredible String Band, Goat are known for wearing tribal masks and colorful ropes during their performances. Having launched their second album "Live Ballroom Ritual" in 2013, the band introduced their second LP "Commune" in September 2014.

Nigerian saxophone legend Orlando Julius who is well-known with his song "Disco Hi-Life" and British psychedelic jazz band The Heliocentrics which collaborated with Mulatu Astatke and Llyoyd Miller and introduced unforgettable project released an album together. Even before the album titled "Jaiyede Afro" hit the shelves, the first single of the album "Buje Buje" caused used a stir in the lists. The album recorded at the analogue studio of the Heliocentrics in London stands out with Julius' authentic afro beat rhythms and the psychedelic touch of the Heliocentrics.

Nolfolk-born British DJ and producer Nathan Fake entered the music industry with his debut album "Drowning in a Sea of Love" in 2006. Characterized as the newest talent of electronic music and techno music will perform at the Red Bull Music Academy as part of the festival. Fake, who enlarged his fan base with his three albums released by Border Community Record Company, has remixed the works of many important musicians such as Radiohead, Tiefschwarz and John Hopkins. With his innovative acid-techno rhythms, Fake was able to perform in the world's biggest cities including Berlin, Barcelona, Madrid and Amsterdam.

Acid Arab, a project by the Parisian duo Guido Minisky and Hervé Carvalho, will be at the Red Bull Music Academy Stage. The turning point for the band, which is inspired by the music of the Middle East, was their trip to Tunisia while they were performing at Chez Moune, one of the most famous night clubs in Paris. In their first EP titled "Le bon vieux temps," the duo invited the genius of dance music I:Cube and worked with Adnan Mohamed, Omar Souleyman and Judah Warsky on their second EP. The band, which synthesizes the complex rhythms of the East with elements of techno music, stands out among other bands that produced experiential musical projects.

Mo Kolours spent his childhood listening to Jimi Hendrix and Michael Jackson. He later became interested in hip hop, dub step and other electronic music genres and created his own unique style, which blends the music of Madlib, Gaslamp Killer and Caribou. The artist, who is highly spoken of by the BBC's famous radio programmer and DJ Giles Peterson, is also one of a favorite musician of Joe Goddard of Hot Chip.

Founded by DJs and graphic designers Felip Salmon and Rafael Pereira in 2010, Dengue Dengue Dengue will rock the Red Bull Music Academy Stage music. The band, who are known for their flawless visual and acoustic shows as well as remixes and mash-ups, took the stage at the most important music festivals in Berlin, Vienna, Madrid, Barcelona, Paris and Stockholm. Dengue Dengue Dengue present the best shows of electronica, pushing the limits of the audience's imagination.

Kuwait-born Zahed Sultan is an alternative electronic multimedia project. Having released his first album "Hi Feat, lo Love" in 2011, Sultan was featured in the Hotel Costes 15 , one of the most important chill-out compilation albums, with his song with French DJ Stephane Pompougnac. The artist, who will hit the Red Bull Music Academy stage during the festival, is well known with eyeamsound, a visual-audio multimedia show, as well as his sets.

Gaye Su Akyol, who made a breakthrough with her debut album "Develerle Yaşıyorum" (I Live with Camels) in 2014, blends Turkish classical music and rock music through her silky voice. She promises an unforgettable performance with her dreamy voice that will be accompanied by cümbüş (a mandolin with a metal body) and violins. Akyol stands out among other young musicians with her innovative style that pulls the audience into the show.

Ayyuka was founded by alternative musicians Özgür Yılmaz, Altan Sebüktekin, Alican Tezer and Ahmet Kul and released their first namesake album in 2007. The band gave concerts at venues from all over the world including Istanbul, Berlin, Lyon and Sao Paulo. Having performed as an opening act for prominent musicians and bands such as Jonathan Richman, R.E.M and Sonic Youth, Ayyuka introduced their second studio album "Kiracı Odaları" (Tenant Rooms) in October 2013. Their third album, which is composed of impromptu compositions titled "Sömestr" (Semester), hit the shelves in March 2015.

Ankara-based Turkish hip-hop Mode XL was founded by Evren Barış and Yasin Vural in 2001. The band which, is known for their outstanding live performances, signed with Hammer Muzik Record Company and released their first album "Atın Jak" in 2003. Performing hip-hop jam sessions in various cities in Turkey, the band introduced their second album "Serseri Serbest Still" (Rascal Free-Style) in 2005. After the release of their third album, "Militanz," the band signed with Sony Music and began working on their fourth studio album.

Kalben's relationship with music started when

she was little. She began writing her first songs

when she was gifted her first piano at the age of eight. After a while, she began taking piano lessons and also learned how to play guitar. She released a few of her tracks via Soundcloud and gave a mini concert at Sofarsounds, an indie music platform and events series. Her voice resembles Tom Waits and her ability to write lyrics resembles veteran poets, according to some critics.

Nilipek, who characterizes herself as a "writer, player, illustrator and singer," got a start to her musical career with Ozan Tekin, Can Aydınoğlu, Tufan Büyükgüngör and Berkay Küçükbaşlar in 2013. The artist created a fan base through her recordings that she released via the Internet and caught the attention of critics thanks to her ability to write lyrics as well as her vocal performance. Her debut album, which is be composed of indie pop tracks, will be introduced to the music market in the upcoming days.

Music has been always there for Ece Özel. She spent her youth discovering new tracks and new genres. In 2009, she began performing as a DJ with a set featuring songs from different genres and styles. Right now, she stands out mostly with her sets featuring techno, house and disco. Özel will heat up the Red Bull Music Academy Stage at the festival.
RELATED TOPICS