Lena Chamamyan: This concert will be full of surprises 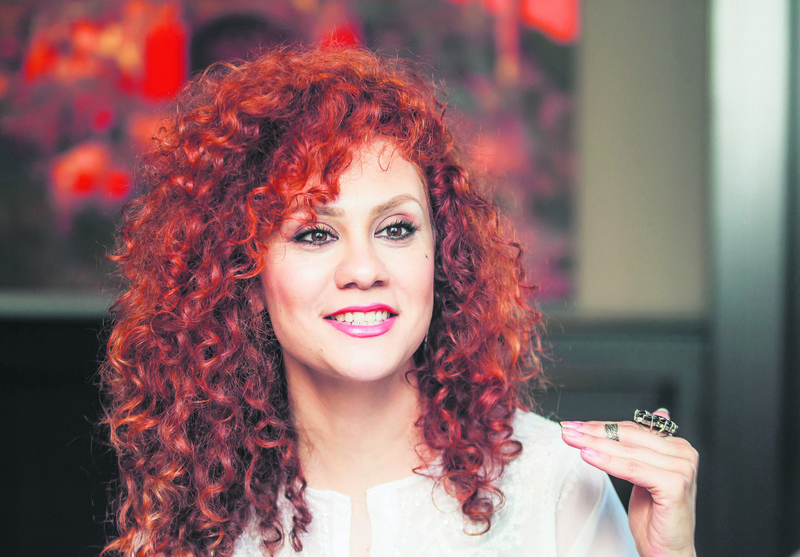 ,My father used to play the saxophone and trumpet and my mother used to sing, so I was surrounded with people who loved music all the time. No one was really a professional musician, but having art in the family gave so much to me.,
by Daily Sabah May 14, 2015 12:00 am

Blending jazz and classical Armenian music, Syrian Armenian Lena Chamamyan believes her sufferings make her music more influential and deep. Forced to leave her home when the Syrian civil war broke out, she resettled in Paris. She said she feels more powerful when she reflects on homesickness in her songs. Prior to her Istanbul concert on May 15 at Istanbul Congress Center, Chamamyan said, "This concert will be full of surprises." Attracting audiences with her rich voice, Chamamyan thinks powerful people almost always have a difficult past, but that is what fuels them and makes them more interesting.

"Each age comes with a different kind of suffering. If I had a simple life, my voice, soul and music would not be as deep. I am a warrior; a warrior with a big heart and voice," she said, adding what she has is a gift that she treasures. "I am proud of and grateful for this. I am excited to meet the Turkish audience," Chamamyan continued. Although she has suffered from many difficulties, she has successfully performed all around the world. Regarded as one of the internationally-reputable singers of the Middle East, Chamamyan received five stars in the world music singer category by Australian media circles in 2008. She is also among the most 500 influential Arabs and has won many prizes. So far, the singer released three albums - "Hal Asmar Ellon," "Shamat" and "Ghazal El-Banat." She has appeared on the prestigious stages of France, Austria, Germany, the Netherlands, Switzerland, Russia, Canada and Italy. With her evocative performances and impressive voice, Chamamyan is ready to be the next guest of the Extraordinary Music Concerts, which continues to introduce musicians with intriguing stories in Turkey.

Daily Sabah conducted an interview with the singer to learn more about her life and career.

Daily Sabah: Why was it you choose to venture from Western classical music to jazz and traditional Armenian music?

Lena Chamamyan: I studied Western classical music together with the Russian and Armenian method of classical singing, so I'm an opera singer and a soprano dramatic. Then I switched to jazz because I love it. I love to create, not just sing a pre-planned repertoire. I really love to perform and create something different on the stage. I feel more energy singing jazz than I do classical music. So in the end, I went for what I love most, my passion.

D.S.: Your first album, "Hal Asmar Ellon," came out when you were in your third year at conservatory. How has your music evolved since then?

L.C.: It has changed a lot, actually. I started off softer back then. Also my personality was different, because in the beginning you feel as if you need to discover yourself with small steps, you don't know where you are going. But now I know what I'm doing and where I want to go. I want to explore and discover new things and take the audience with me as I do. At the beginning of my musical career, I can say I was softer than I am now, more dreamy and in a way, more girly. Now I see myself as a stronger woman and this affects my music.

D.S.: Can you talk about the process you go through when composing? What influences you to write songs?

L.C.: It's interesting. Every time I want to compose, I go back to my roots. When you want to go further with your music all you end up doing is going back to your childhood and earlier memories. When I realized this, it was so weird, it was the first time I understood this. I've been composing now for four years and I love to improvise on stage. Improvising is like composing on the spot, so all improvisers are composers themselves. But actually writing and arranging the music is different. The influences are always really the roots. It's actually really modern, the contrast between my past and my future and I love mixing them in the middle.

D.S.: How has growing up in a musical environment influenced your musical career?

L.C.: My father used to play the saxophone and trumpet and my mother used to sing, so I was surrounded with people who loved music all the time. No one was really a professional musician, but having art in the family gave so much to me. However, studying music in university affected me greatly. I really believe that studying music in university is one of the best decisions any musician can ever make. You can be gifted and talented, but being surrounded by musicians, professors and students for five years gives you different direction in your music. You need to live as a musician to become one because it's not only a hobby, it's a career. To really work on a career you need to constantly be surrounded by the pressure, the joy and sadness of it all. This is what really influenced my career.

D.S.: What are some of your expectations for performing in Istanbul once again?

L.C.: I'm extremely excited and happy about it. Last time I was here, I was here for a jazz festival and the theme was jazz, of course. This time I'm creating the theme myself. I will be performing some new songs with the Turkish musicians I have on stage. So I'm really excited about the concert.

D.S.: Are there any musicians or artists whom you look up to or get inspiration from?

L.C.: It's more genres of music that inspire me. I love fado, Indian classical music, Sufi music, oriental music and modern music. I love contemporary music in general, but not the extreme kind, I want to understand what I'm listening to. I love melodies in general and soundtracks, new experiences in general I can say.

D.S.: What does Paris mean to you? How has living there changed or influenced your music?

L.C.: The first time you go to visit a city you feel something about it. Paris had a really big effect on me. The first time I went there I fell in love. But actually it's really one of the hardest cities to live in. I believe that a city can take from you but it can also give you something as well. That's what Paris did to me. There is a high level of beauty in Paris and to live there you need to keep up with the standards of it, which are really high standards. This makes you search for more beauty in your work, in yourself and in everything around you. I believe that in art, this is necessary and it affects me and my music in a good way.

D.S.: You said that you wrote your latest album, "Cotton Candy," for the little girl inside you. Can you tell us a little more about the album and its origin?

L.C.: The album has 12 songs and they are all my creations. I worked with other musicians for sure, but I worked on every song tediously to create a handmade album. I'm a woman who loves stories and the inner girl inside of me loves stories as well. So the idea of the album was to tell these stories to people, especially the children in Syria. I am lucky to have the chance to live my dream. I always dreamed about becoming a singer. I'm afraid that the conflict in Syria took the dreams out of the children, so I'm singing for them and telling them that sometimes we need to live hard times so we can live our dreams. "Cotton Candy" is my stories for the people in Syria and about my stories about Syria for other people. In the end we are all human and we go through the same troubles and live for happiness. I wanted to share my private stories though the songs on my album.
RELATED TOPICS