Serenity and melancholy in one voice 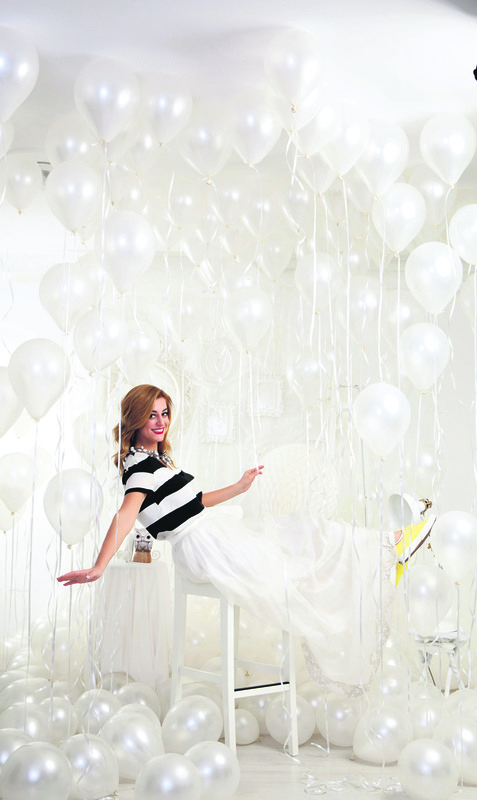 In her latest album, Dilek Tu00fcrkan's voice flows smoothly. Melancholy suits her voice, and the underwater photo shoots for the album cover complete the work.
by Cenk Erdem May 26, 2015 12:00 am

Known for her modern, charming style and voice while singing nostalgic and classical songs, Dilek Türkan continues to introduce new songs that will take audiences away to a serene dreamland

Dilek Türkan continues to be the modern voice of Turkish music with her newest album "Suya Söyledim" (I Told to the Water) for which she covered the most popular and loved songs of Turkish music. "Suya Söyledim," which is composed of songs arranged by Alp Ersönmez and Cenk Erdoğan, has already found its place on the shelves of music stores with a Sony Music tag. One of the surprises on the album is the song "Bir Ömürlük Misafir" (A Lifelong Guest), which was written by Sezen Aksu and Bülent Ortaçgil, and whose composition and arrangement are by Erkan Oğur.

With her latest album "Dilek Türkan's voice flows smoothly. Melancholy suits her voice, and the underwater photo shoots undertaken by Barış Güleç for the album cover complete the work. The video for her hit single from the album, "Bana Bir Aşk Masalından" (Tell me a Fairytale of Love), whose lyrics and composition are by Erol Sayan, is currently being played on the screen. We talked to Türkan about the sadness in her songs, her joys in daily life, the songs featured on her album and her dreams about the future.

Daily Sabah: You cover old songs of Turkish music on your newest album. Do you think it is a little melancholy?Dilek Türkan:

My interpretation of the songs is actually a reflection of my soul. I have two sides, one is my cheerful state that I let people see in my daily life and the other is the melancholic side that I experience inside every day. Naturally, this melancholic state surfaces in my songs. The album mostly features old songs. However, there are also new songs that also reflect this melancholic mood. For me, it does not matter whether the song is old or new. This melancholy comes from within. It exists in every song and it is totally an intimate feeling for me.

D.S.: Even so, can we say that you are prone to melancholy as a singer?Türkan: Like I said before, I live melancholy within. I sometimes express it through my writing, but I am very energetic and entertain life in a daily rush. Maybe because of my age, there are things that touch me deeply in life. These things have to be tolerated one way or another. I try to balance the intense emotions that I experience in my songs with daily entertainments.

D.S.: While recording your songs, which one was emotionally difficult to perform?Türkan: "Bir Ömürlük Misafir" has short lyrics, but a very deep meaning. I am profoundly touched by the song and had to perform it well. Also, Erkan Oğur sang the song previously, so it was hard for me to reflect my interpretation of it. I think this song is the best answer to your question.

D.S.: Can we say that your lively song "Mavi Gözlerin" (Your Blue Eyes) celebrates love?

As seen in many other songs, this song also features love, but a different kind. The song depicts a wounded love that is able to recover itself and keep itself alive and on its path. Yes, it is a very energetic song, maybe because it represents love that does not collapse and stands still.

D.S.: When we listen to your next song "Fikrimin İnce Gülü," (The Delicate Rose of My Thoughts), it sounds as if it is going to kill us with love. How do you describe love?

D.S.: Does your song "Bir Ömürlük Misafir," which was written by Sezen Aksu and Bülent Ortaçgil and was composed by Erkan Oğur, have a special story for you?

This song does not have a story, but rather is Erkan Oğur's present to this album. It is very precious to me. One should have friends and older people that they can depend on. I am a very lucky person in this respect.

D.S.: You represent Turkish music with your new album, which brings a breath of fresh air to this field. What are your dreams?

When I started to perform music years ago, I wanted to find the music that I was dreaming of. It was an endless dream, because music is always developing and changing. I did not lose my dream. I dream of carrying out projects with world musicians, performing my songs, recording Turkish classical music to transfer to future generations and hearing my name when Turkish music is mentioned somewhere around the world.
RELATED TOPICS