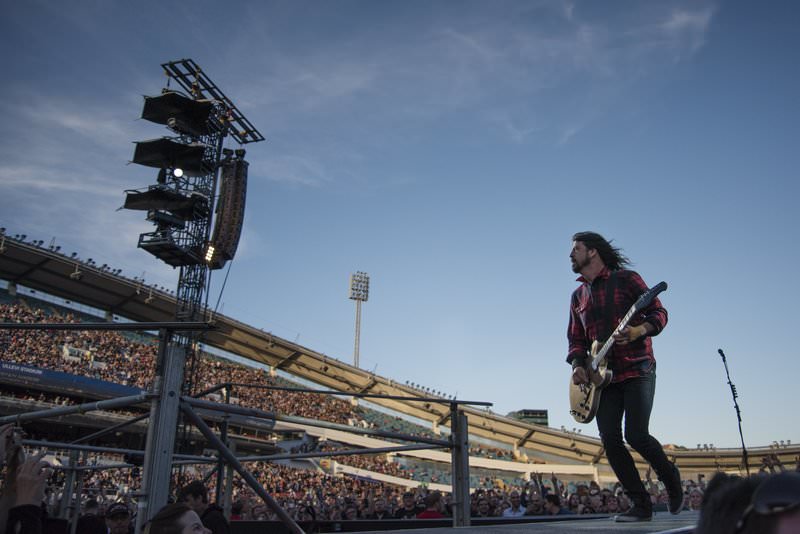 Foo Fighters band member Dave Grohl performs during the band's concert at Nya Ullevi in Gothenburg, Sweden, June 12, 2015, before falling off the stage (Reuters Photo)
by Compiled from Wire Services Jun 13, 2015 12:00 am
Foo Fighters star Dave Grohl has broken his leg after falling off the stage during the rock band's performance in Sweden on Friday. However, despite his serious injury, Grohl managed to finish the show as he promised.

The band were only two songs into their set at a stadium in Gothenburg, Sweden when Grohl went to jump on a ramp but missed and fell off the stage, BBC reported.

His bandmates continued to play cover versions on the stage while Grohl were receiving medical attention.

After an hour, Grohl made good on his promise sitting on a chair with his leg bandaged up and continuing his performance.

His band later tweeted a picture of what appears to be an x-ray of his leg.

The Foo Fighters are due to play their next concert on Sunday at the Pinkpop festival in the Netherlands, followed by Wembley Stadium in London next weekend and then a headline set at the Glastonbury Festival in the UK on 26 June.
Last Update: Jun 13, 2015 2:21 pm
RELATED TOPICS