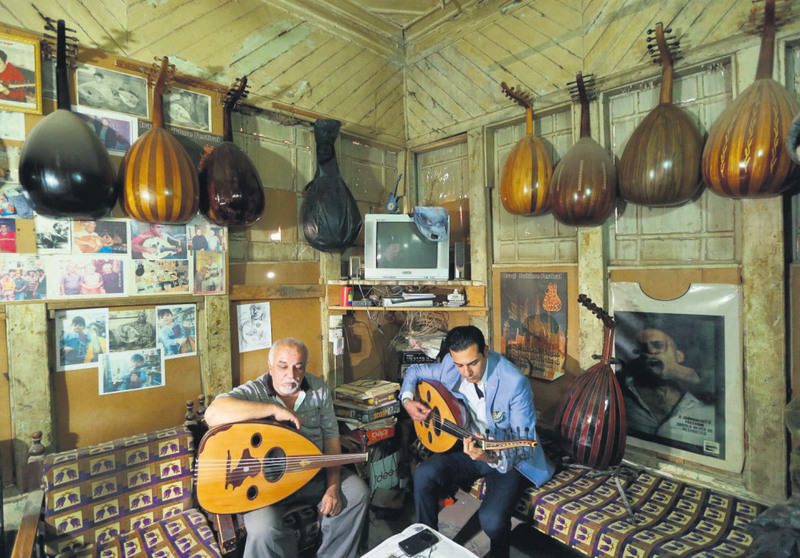 In a Baghdad workshop, Mahmoud Abdulnabi hand-carves a wooden oud, a string instrument with ancient roots that has fallen silent in much of the war-torn country

"The oud is different than other musical instruments," said Abdulnabi, who has crafted ouds played by some of Iraq's best known musicians, many of whom look down from headshots on the walls. "If you feel joyful, it can play your joy. If the circumstances are sad it can play your sorrow and help to empty whatever is in your chest."

The self-proclaimed Islamic State of Iraq and al-Sham (ISIS) group has banned music in the third of Iraq under its control, but in Baghdad a growing number of musicians and other artists are defying the extremists, hoping to revive a rich culture smothered by decades of war.

"In Iraq there is renewed interest in oud and other high-caliber music since the war, but this effort is still in the very beginning," said Bassam Salim, an expert oud player and teacher in Baghdad. "Every artist has a very huge responsibility to renew and revive the real value of (classical) Iraqi music."

Abdulnabi is one of the last craftsmen in Baghdad who carves ouds by hand. "Our brothers, the makers in Syria, Turkey and Egypt, might produce 12 pieces a day" using machines, Abdulnabi said. "We produce one or two pieces in a month."

Iraq is widely believed to be the birthplace of the oud, an ancestor of the guitar and a central instrument in Middle Eastern music. The oldest known image of an oud is a 5,000-year stone carving found in southern Mesopotamia depicting a woman strumming the instrument on a boat.

These days the most prized ouds are made from ebony and Indian sesame, woods not available in Iraq. At Abdulnabi's shop, on the top floor of a building in a historic neighborhood, prices range from $300 to several thousand dollars.

His business suffered during the sectarian violence that erupted after the 2003 U.S.-led invasion, when Sunni and Shiite extremists threatened musicians and drove them underground. Many of the country's top musicians fled, and parents kept their children from taking up music for fear of attacks.

These days the capital is more secure, despite the war raging elsewhere in the country, and a small group of musicians and other artists hope to inspire a new generation to see past the war and destruction that has convulsed the country for decades.

Karim Wasfi, the conductor of the Baghdad Symphony and founder of the organization Peace Through Art, says the arts are essential to "a life of civility." The group runs a school in the former Nigerian Embassy at which children study music, art, poetry and even traditional etiquette. It recently opened a second Baghdad branch, and hopes to inaugurate a third in the southern city of Basra.

"There's a freedom in it," Wasfi said. "Radicals tend to control people through ideologies... When we send the opposite message, we challenge them and we challenge their existence."

Wasfi himself has taken the defiance a step further, by playing his cello at the sites of bombings. His students have performed in front of prominent sculptures and monuments.

Salim says the oud "represents every special moment in life, from sorrow, sadness, joy and all combinations of emotions... It's a huge national pride when I feel that through this great instrument, I represent Iraq's cultural history."
Last Update: Jul 03, 2015 10:36 pm
RELATED TOPICS