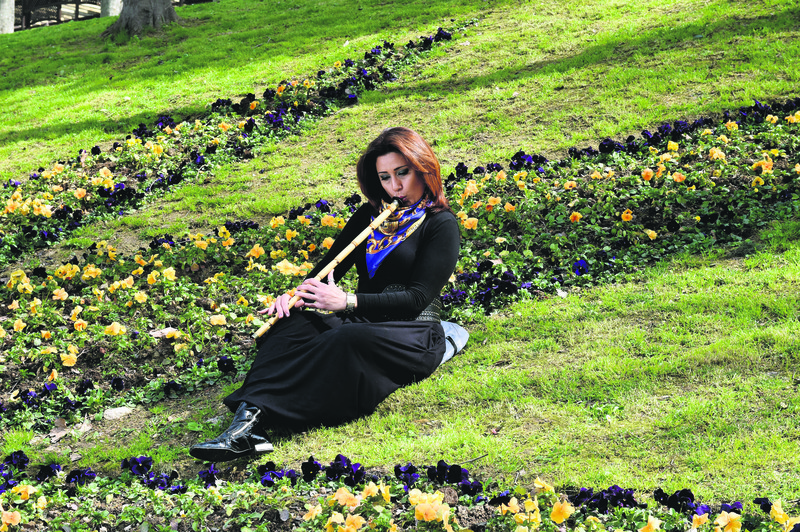 Karadau011f will take the stage with four master musicians. The program features both Turkish and world music.
by Daily Sabah Jul 13, 2015 12:00 am

One of Turkey's most famous female ney players, Burcu Karadağ, will give a concert in Ghent, Belgium as part of the International Art Festival Europalia 2015, which will focus on Turkey as a cradle of civilizations as of October until the end of January 2016

She will be accompanied by Murat Süngü on cello, Şevket Aşıkuzun on piano, Uğur Varol on bass and Oray Yay on percussion.

Karadağ said that they are preparing for the concert, scheduled to take place in Gent de Centrale, one of Europe's most important concert halls, like national sports team players. "I will take the stage with four master musicians, all of whom are very successful. Our repertoire features both Turkish and world music. It will be a nearly one-hour program," she said. "I believe I will blaze a trail as a female ney player," Karadağ said. She said performing as a female ney player is considered normal by European audiences. "In Europe, your music is the first thing that is important, not your sex. If your music is successful, then your sex does not matter. However, things are the opposite for ney players in Turkey," she said. Karadağ said that when people listen to the ney for the first time, they are quite influenced by its sound. "A German journalist once said to me that I should work as an honorary cultural attache of Turkey," Karadağ said. "The journalist only listened to my music and did not know where I came from. I was proud to hear such words from a foreign audience," she added.

Born in 1979 in Istanbul, Karadağ studied at the Classical Turkish Music State Conservatory of Istanbul Technical University following her secondary education. She received traditional Turkish music solfege and theory classes from Erol Sayan and Doğan Dikmen. She studied ney with Salih Bilgin and Niyazi Sayın. Ali Eral taught her Western music. Karadağ received her master's degree from the Haliç University Social Sciences Institute with her dissertation "Türk Müziği Konservatuvarlarında, 4 yıllık Lisans Ney Eğitimi Üzerine Bir Öneri" (A Proposal on Ney Education at the Classical Turkish Music Conservatories,' Four-Year Bachelor's Degrees). She gave ney courses at Caferağa Madrasah until 2012. In 1999, she joined the state-run Turkish Radio and Television Corporation's (TRT) Istanbul Radio as a ney player and appeared in many radio and TV programs. In 2001, she released a solo album featuring the most prestigious compositions of classical Ottoman and Turkish music from the TRT archives under the baton of Vahit Anadolu. Karadağ also works as a lecturer at Haliç University and has projects with many important figures including Fazıl Say, Tuluğ Tırpan, Sertab Erener, Trilok Gurtu, Martin Grubinger, Rudiger Oppermann, Angelika Akbar, İhsan Özgen, Önder Foçan and Okay Temiz.

In 2013 she released another album entitled "Neyzen" (Ney Player), which again features classical Turkish music. Her work is the first album released by a female ney player. She also interpreted Fazıl Say's "Hezarfen Ney Concerto" and "Istanbul Symphony," which was released on CD and DVD. She wrote a book on ney education called "Meşkte Ney Eğitimi" (Ney Education in Practice) published by Pan Publishing House in 2013. Karadağ plays on TRT Istanbul Radio and other music societies as well as her own group, the Burcu Karadağ Ensemble. She is also interested in "ebru," the traditional art of marbling.
Last Update: Jul 13, 2015 10:26 pm
RELATED TOPICS