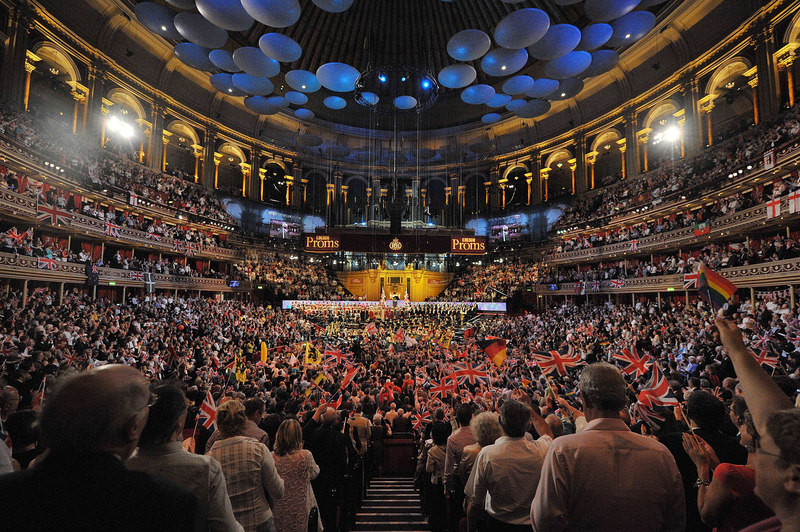 A scene showing revellers waving flags during the Last Night of the Proms at the Royal Albert Hall in west London.
by Aug 21, 2015 12:00 am

With over a century of history, the Proms, an eight-week classical music concert series with affordable tickets in London, has been entrenched in the British cultural landscape

The London-based Proms are celebrating their 120th year and the world's biggest classical music festival continues to draw in crowds by mixing top performers with accessible ticket prices. Star soloists and concert-goers alike hail the atmosphere at the BBC Promenade Concerts, with their quirks, traditions and sense of occasion. Staged at the 5,500-capacity Royal Albert Hall, the circular, domed 1870s Italianate masterpiece in London, the eight-week series of concerts are firmly entrenched in the British cultural landscape. Part of their charm is the tradition of "Promming" - turning up on the day for the 1,350 standing places costing 5 pounds. "Prommers" can therefore watch from right in front of the orchestra.

"The good thing is that the best position in the house is the cheapest," Lord of the Rings actor Ian McKellen told AFP after a performance of interludes from Benjamin Britten's "Peter Grimes." "Five pounds, compared to 60 pounds where the Queen sits," he said, pointing to the boxes at the back. "It's a whole reversal of the norm."

Promming veterans and first-timers alike form an orderly queue for the standing tickets. "I saw the Proms as a child on television so I'm quite excited to be here," said Leanne Schmidt, from Yorkshire in northern England. Daniela Cechova, a psychologist from Slovakia's capital Bratislava, brought her 15-year-old daughter Nela.

"I wanted my daughter to experience the same experience I did 15 years ago. I came three times in five days. It was breathtaking. The music and the building are fantastic," she said. Christian Holt, a Londoner, has been promming around 20 times, drawn by the "variety and quality" of the concerts, plus the cheap tickets on the day of the concerts.

He said: "The acoustics are OK. I've heard better. That's the one thing I'm not massively keen on."

Naik Lashermes, 30, a Frenchwoman living in London, has gone Promming a dozen times in five years. "It's the quality of the musicians, plus the fact that it's virtually for free. It's the ambience of a festival in the world of classical music," she said. The red-upholstered hall rises 135 feet from the arena floor, through the stalls, three tiers of boxes, a circle and then the standing gallery at the top. The stage thrusts out into the arena. Some Prom-goers go straight from work with their briefcases, some don cocktail dresses for the occasion, while others wear t-shirts and baseball caps. Some stand arms folded, soaking in the music, while the more romantic types put arms around their partners.

People of all ages and nationalities make up the audience, while latecomers are not admitted until an interval. The Proms are back on BBC World Service radio after a five-year break, with six programs mixing performances with themes and topics from the concert series. The 2015 season began on July 17 and culminates on Sept. 12 with the traditional Last Night of the Proms, a patriotic singalong and a unique celebration of Britishness. On Aug. 10, the 120th anniversary of the Proms first concert, British star violinist Nicola Benedetti performed Erich Wolfgang Korngold's "Violin Concerto in D major, Op. 35" (1945). Afterwards, there were shouts of "Bravo!" while some even ululated. The rumble of foot-stamping for an encore spread throughout the hall. Benedetti said playing the Proms was "the best thing, ever." "It's like no other in terms of the strength of the feeling coming from the audience," she told AFP. "It's not really comparable to anything else, just in terms of the collectiveness.

"You don't feel like you're just giving something to people, but that they're giving back to you." At the stage door afterwards, orchestra members bid each other farewell and eager music students quiz performers for technique tips. Eva Malmbolm, from Sweden, a viola player in the Bournemouth Symphony Orchestra, said playing the Proms was "a bit of a pressure cooker". "It really focuses you when you realize there's 5,000 people staring at you," she told AFP. "It's electric, an amazing atmosphere and a very exciting place to play. I don't think anybody leaves without a smile on their face."
RELATED TOPICS