The Turkish folk singer who inspires US rappers 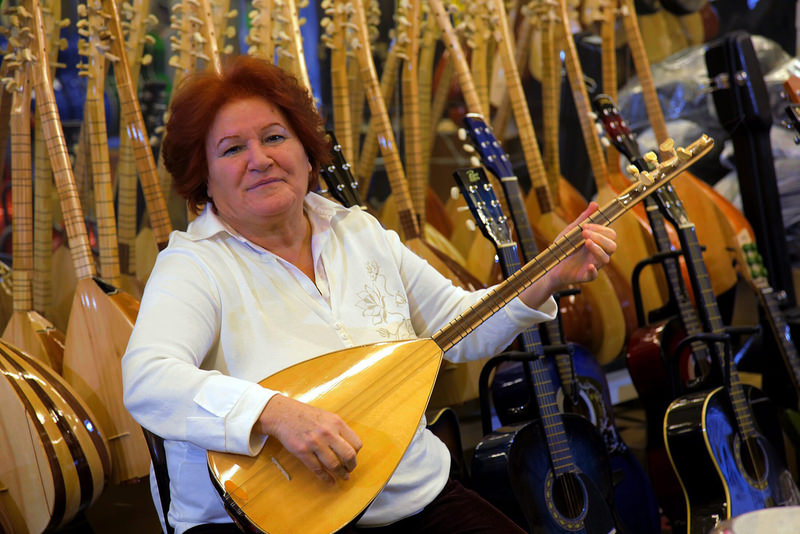 by Handan Kazancı Aug 21, 2015 12:00 am
An important voice of Turkish protest music, Selda Bağcan, has seen her music influence artists light-years away from her musical universe. Indeed, her song "İnce İnce" was recently sampled on hip-hop producer Dr. Dre's long-awaited album "Compton," which was released on Aug. 7.

The 66-year-old singer did not feel the need to hide her ignorance about the rap singer when asked what she thought of Dr. Dre's latest album, which was streamed 25 million times during its first week on Apple Music and downloaded nearly half a million times on iTunes. "He is not a singer that I know very well," says Bağcan, sitting in her living room in which one is surrounded by musical instruments and various awards she has received. "I sing folk songs, how would I know about him? I know Madonna and Michael Jackson," she says, giggling.

Bağcan became famous in Turkey for her political lyrics. A prominent figure in the 1970s in Turkey, she made several trips to jail for a total of nearly five months for either singing in Kurdish or turning banned poems by poet Nazim Hikmet into song lyrics. She celebrated the 44th anniversary of her music career this year by releasing an album "40 Songs of 40 Years." The album, released by her own record company Major Music on June 13, currently ranks second on Turkish entertainment retailer D&R's music chart. Bağcan, who lives in Tarabya, Istanbul, along the Bosphorus with more than 20 cats in a duplex house, says Dr. Dre's team contacted her for copyright purposes: "[They] have not paid copyright yet, but it is likely they will pay; we are waiting," she says.

Andre Romelle Young, aka Dr. Dre, is a former member of rap group N.W.A. (Niggaz Wit Attitudes), which is widely recognized for having revolutionized rap music with such hits as Express Yourself and "F--- the Police." He is considered the richest rap artist in the world, having sold Beats Electronics, an audio product company that he co-founded, to Apple for $3 billion last year. However, the iconic hip-hop producer who launched the careers of such rap stars as Eminem, Snoop Dogg and 50 Cent, is not the first rapper to use a sample from Bağcan. So far, says Bağcan, the best use of her song "İnce İnce" was by Mos Def, an American hip-hop singer who won a Grammy award with his 2010 album "The Ecstatic," which includes "Supermagic," featuring Bağcan's song. "İnce İnce" comes from Bağcan's 1976 Turkuola album and is based on a folk song by Aşık Mahzuni Şerif (1940-2002), a folk musician, composer and a poet. His title Aşık or Ashık is a title loosely meaning balladeer.

Dr. Dre uses the same riff as Mos Def in his song "Issues." Today, Bağcan believes her fame outside of Turkey is bigger than in her home country, a fact she has seen witnessed while performing at rock festivals around the world in the last couple of years. Recently, she took to the stage at a festival in Holland with Tel Aviv-based rock band Boom Pam. "The audiences were singing Turkish songs with us," she recalls. "It is unbelievable that they take an interest in [our songs] more than audiences here [in Turkey]." According to Bağcan, interest in her songs is a result of her music's strong ties to Anatolia. "This music is from Anatolian lands, something they [the foreign audience] are not used to," she says. "And also my voice is impressive." "There is pain, rebellion, sadness, every voice of this land," she says. During the sixties, Turkey was not immune to the cultural phenomena hitting youths in Western countries. Bağcan is no exception. As she blends western music with Turkish folk songs, the result is "marvelously modern," she adds. Bağcan is preparing for another concert in the U.S. next year. Meanwhile, the movie "Straight Outta Compton" about Dre's pioneering outfit N.W.A. took the U.S. box office by storm last weekend.
RELATED TOPICS