Jazz State of the City 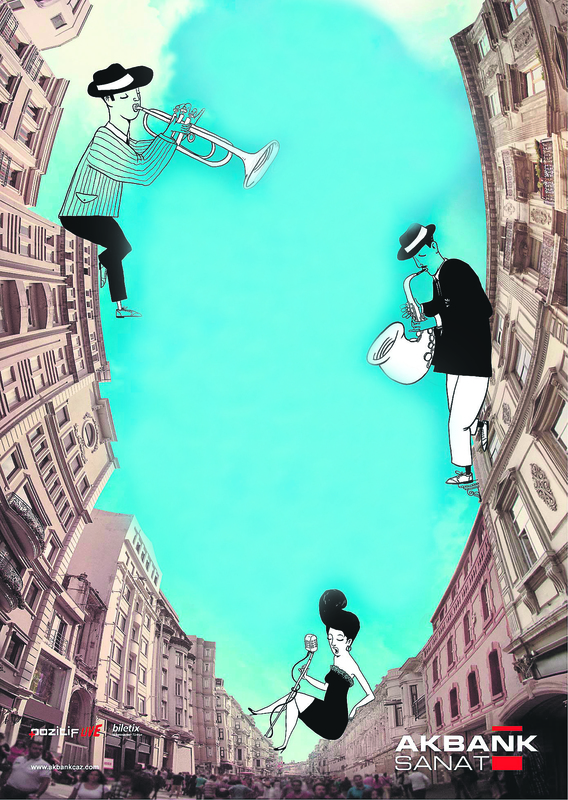 One of the most anticipated festivals in Istanbul, the 25th Akbank Jazz Festival, will take place between Oct. 21 and Nov. 1

The 25th Akbank Jazz Festival will once again host many great figures this year between Oct. 21 and Nov. 1, including David Sanborn, Manu Katche, John Scoffield & Joe Lovano and many others. Sanborn is one of the most successful and inspirational saxophone virtuosos of all time. Manu Katche has a unique style and is considered to be one of the most important jazz drummers. Two great names of jazz, John Scoffield & Joe Lovano, will share the same stage again after 20 years. In addition, famous bass guitarist Tom Jenkinson will perform one of the festival's memorable performances with his unusual project Squarepusher. The festival will also be organized in various categories as it was in past years.

Hosting masters of jazz for 25 years, the festival will offer a musical feast to its followers again this year. In its "Masters of Jazz" section, the festival will host David Sanborn, John Scofield & Joe Lovano, Manu Katche, Bill Frisell, David Murray, Dave Douglas and Aaron Goldberg.

Selected as the "Jazz Artist of the Year," "Jazz Album of the Year" and "Jazz Trumpeter of the Year" by famous jazz magazine Down Beat, American trumpeter Dave Douglas will perform his jazz, classical, folk, electronic and Klezmer-inspired compositions on Oct. 21. A powerful female vocalist, Carmen Lundy is among the most creative jazz composers with more than 100 songs who will make you experience an unforgettable night on Oct. 21 at The Seed.

Combining his sense of rhythm inherited from his Ivory Coast origins with formal jazz education, Manu Katche is considered one of the rare percussionists to combine African rhythms and classical drum beats. One of the stars of the jazz festival, Katche will perform with the Norwegian contrabassist Ellen Andrea Wang on Oct. 22 at Cemal Reşit Rey (CRR) Concert Hall.

Another guest is Grammy Award winner Bill Frisell who made his mark on jazz history. The artist is stunning his fans by his productivity with more than 30 albums to his name. Bill Frisell will offer an unforgettable performance on Oct. 23 at the Zorlu Performing Arts Center.

Sharing the stage at the festival, John Scoffield & Joe Lovano caused a stir in the jazz world when they reunited after 20 years.Scoffield, considered one of the most important composers and guitarists of contemporary jazz, and Joe Lovano will perform on Oct. 25 at CRR Concert Hall. The most mentioned star in the Jazz universe since her debut album released in 2003, American singer and composer Lizz Wright will perform one of the unforgettable concerts of the Festival on Oct. 25 at CRR Concert Hall. Grammy-awarded jazz musician David Murray composed a three-part suite following the death of his close friend Mehmet Uluğ in 2013, who had invited the artist to perform in Turkey 25 years ago. On Oct. 27 at Babylon Bomonti, the famous artist will perform his "Mehmet Uluğ Suite" as well as his work composed in memory of Butch Morris that will be recorded on his new album at Babajim Istanbul Studios in October. Having shared the stage with masters such as Betty Carter, Joshua Redman, Wynton Marsalis and Kurt Rosenwinkel - one of the most followed jazz pianist with his unique style - American jazz musician Aaron Goldberg will perform on Oct. 27 at Nardis Jazz Club.

Endeavoring to make universally standard music with Turkish lyrics, Jülide Özçelik captured the attention of the jazz world with her debut album "Jazz Istanbul, Volume I." She will perform on Oct. 27 at the Caddebostan Cultural Center accompanied by Turkey's outstanding jazz musicians. One of Londoner guests of the Festival, Poppy Ackroyd will perform songs from her second album "Feathers," which was released in 2014, on Oct. 30 at Akbank Sanat.

One of the surprises of this year's festival is David Sanborn, one of the most inspirational and successful saxophone virtuosos of all time. The leading artist for contemporary music since the '70's, Sanborn has won six Grammy Awards and has one platinum and eight gold albums to his name. He will meet jazz enthusiasts on Oct. 31 at the Zorlu Performing Arts Center.

One of the most significant ambassadors of Scandinavian music art, Susanne Sundfør will perform on Oct. 31 at the Zorlu Performing Arts Center as part of the world tour for her new album "10 Love Songs." One of the most popular contemporary electro-pop artists Sundfør will add spice and zest to the festival with her melancholic songs.

Among the festival's surprises this year is Squarepusher, one of the most important representatives of electronic music. The unusual project by famous bass guitarist Tom Jenkinson blends fusion jazz with drum and bass in his compositions that will challenge his listeners' approach to electronic music, even by the most conservative jazz lovers. Squarepusher will perform on Oct. 29 at Babylon Bomonti. As part of the world tour for his last album "Damogen Furies," Squarepusher will offer music of now, but also the music of tomorrow.

Considered one of the pioneers of Indie music, the Scottish group Belle & Sebastian will perform on Oct. 30 with their emotional songs and fantastic scene performance at Volkswagen Arena.

The Kerem Görsev Quartet, composed of jazz pianists Kerem Görsev, Kağan Yıldız, Ferit Odman and Engin, will perform Kerem Görsev's compositions on Oct. 24 at the Caddebostan Cultural Center. Appearing as a performer, composer and director of various jazz projects for many years, Ercüment Orkut will present his first solo album "Low Profile" on Oct. 24 at Akbank Sanat. Established by the most important Turkish jazz musicians, such as Önder Focan, Kağan Yıldız, Batuhan Şallıel and Ferit Odman, Standard a la Turc reinterprets traditional folk and arabesque songs through jazz, and will perform on Oct. 26 at Nardis Jazz Club. Despite different musical backgrounds, Amsterdam-based bass clarinet virtuoso Oğuz Büyükberber and resident Berliner and guitarist-composer Marc Sinan are able to reflect contemporary and traditional patterns in their music. The two will share the stage for the first time at the festival on Oct. 27 at Akbank Sanat.

The Istanbul Youth Jazz Orchestra, one of the earliest corporate jazz supporters in Turkey, sponsored by Bahçeşehir University, which embraces jazz music with academic values, will perform under the conductorship of pianist, composer and instructor, Baki Duyarlar. Formed with the intention of opening new doors for Turkish jazz by offering an outlet for young talents and to introduce Turkish artists' authentic compositions to jazz enthusiasts, the Istanbul Youth Jazz Orchestra will perform on Oct. 28 at the Caddebostan Cultural Center with its 17 members who are between the ages of 19 and 25. World famous duduk master Suren Asaduryan and Istanbul-based jazz pianist Ali Perret's project, Ali Perret's DU, blends 1,000-year-old Anatolian Folk Songs with contemporary harmonies to create a new universal language. The pair will share their musical tales with Festival goers on Nov. 1 at Babylon Bomonti.

Including artists Jim Baar and Clive Deamer from the '90s cult group Portishead - the tout of an ordinary British group hiding their faces on stage - The Blessing will be at Babylon Bomonti on Oct. 31. Described as "big and bold folks of contemporary jazz" by critics, don't miss this concert by Get the Blessing to listen to their cheerful, sarcastic and surprising music as well as to see their real faces.

Korhan Futacı & Kara Orkestra adds another ritual concert to the festivals program by transforming the everyday chaos and madness in Istanbul into a colorful musical tale. Korhan Futacı & Kara Orkestra will let the festival audience enjoy a musical experience beyond all universes on Oct. 31 at Moda Sahnesi. Expected to perform in Turkey for a long time by European jazz enthusiasts, the Tingvall Trio is one of the major names of the festival's program. The four-album trio will perform on Oct. 31 at Akbank Sanat with their pop-rock blended compositions and their unlimited energy.
RELATED TOPICS