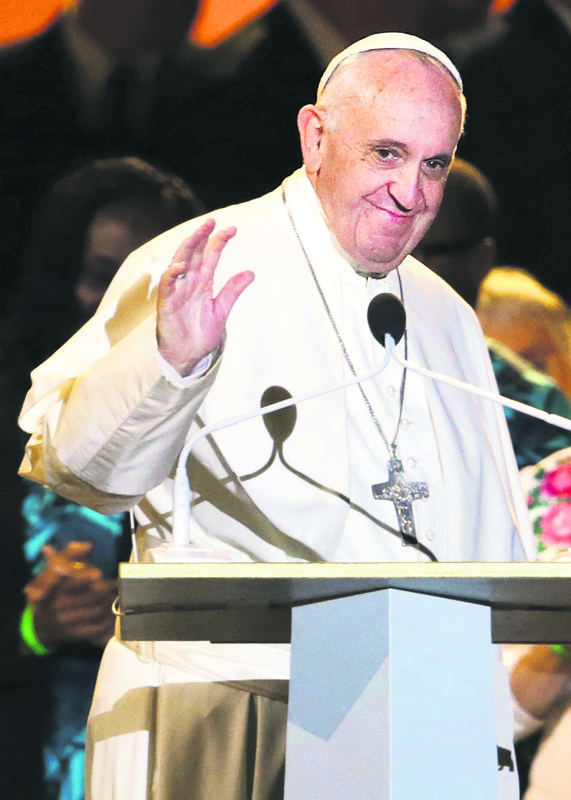 by Compiled from Wire Services Sep 28, 2015 12:00 am
Pope Francis is releasing an album of speeches set against a background of music ranging from rock to Gregorian chants. European music label Believe Digital said on Friday the album "Pope Francis: Wake Up!" combines extracts of 11 of Francis's public speeches in Spanish, Italian, Portuguese and English, and Christian hymns reworked by contemporary musicians.

The album, which the record label said has been approved by the Vatican, will be released worldwide on Nov. 27. The title track, "Wake Up! Go! Go! Forward," was previewed on Rolling Stone magazine's website on Friday during the pontiff's first visit to the United States. The track features a speech in English by Francis on a trip to South Korea. To the pope's voice and the crowd's applause, the song builds on rock guitar and keyboards akin to 1970s rock, as well as trumpets more reminiscent of the Vatican.

The Argentine-born pope's album is available for pre-order on iTunes. The speeches on the album address issues including peace, work, dignity and people in need, the producers said in a statement. They include the pope's June 2014 invocation for peace together with Israeli President Shimon Peres and Palestinian leader Mahmoud Abbas during a visit to the Vatican.

Don Giulio Neroni, the producer and artistic director of the album, told Rolling Stone that contemporary music worked well for Francis's words. "I tried to be strongly faithful to the pastoral and personality of Pope Francis: The Pope of dialogue, open doors, hospitality," he was quoted as saying. Some of the album's proceeds will be donated to "a support fund for refugees," according to a news release.
RELATED TOPICS