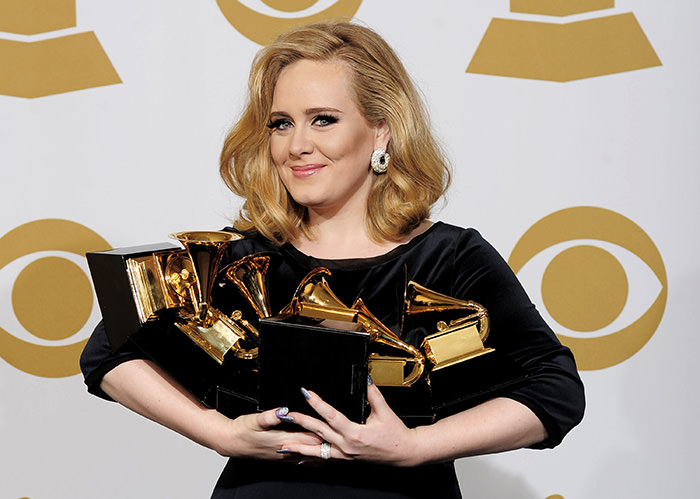 Adele poses backstage with her six awards at the 54th annual Grammy Awards in Los Angeles (AP Photo)
by French Press Agency - AFP Oct 23, 2015 12:00 am
British singer Adele on Friday released a melancholic ballad from her hotly-anticipated new album due out on November 20, breaking a four-year wait for millions of fans after her best-selling "21".

"Hello" is about a love story gone wrong and features the same powerful voice and emotion of her international blockbuster "Someone Like You".

"I'm sorry for breaking your heart/ But it don't matter, it clearly doesn't tear you apart anymore," the 27-year-old sings in the black-and-white video, filmed in the Quebec countryside around Montreal.

The album "25" is being released on November 20. The singer told fans in a letter posted on her social media accounts this week that she chose the title because her 25th birthday marked a turning point.

"My last record was a break-up record and if I had to label this one, I would call it a make-up record," she said. "I'm making up with myself. Making up for lost time. Making up for everything I ever did and never did."

The new release will be Adele's third album and follow a pattern as her previous works were entitled "19" and "21," also after her ages.

"21" -- which featured "Someone Like You" and other hits including "Rolling in the Deep" -- won the Grammy award for Album of the Year and spent two consecutive years as the top-selling album in the United States.

In Britain, "21" is comfortably the best-selling album of the 21st century so far. After the massive success, Adele said that she wanted a break to give some time to herself. While "Someone Like You" reflected on a break-up before her stardom, Adele in 2012 gave birth to a son with a new partner.
Last Update: Oct 23, 2015 9:12 pm
RELATED TOPICS