Michael Jackson's Thriller breaks another record, first album to sell more than 30 million in US 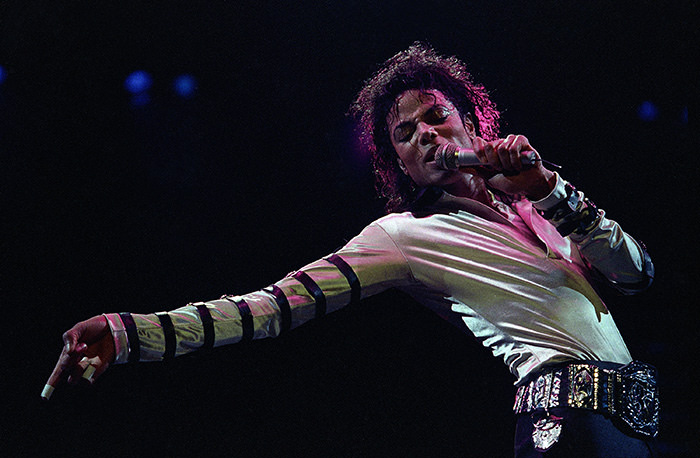 1988 file photo, Michael Jackson leans, points and sings, dances and struts during the opening performance of his 13-city U.S. tour (AP Photo)
by Associated Press
Dec 16, 2015 12:00 am
Michael Jackson has broken another music record even after his death, with "Thriller" certified Wednesday as the first album to sell more than 30 million copies in the United States.

The Recording Industry Association of America announced that the 1982 work was its first "30 times platinum" album, with platinum defined as selling one million copies -- meaning roughly one out of every 10 Americans has a copy.

"What an exceptional achievement and testament to 'Thriller''s enduring spot in our hearts and musical history," the industry group's chairman, Cary Sherman, said in a statement.

"Thriller" was considered a musical and marketing breakthrough, with the new "King of Pop" seizing on the possibilities of then nascent MTV to promote his music through videos and glitzy concerts.

"Thriller" produced a string of mega-hits including "Beat It" and "Billie Jean" and landed Jackson a record 12 nominations at the Grammy Awards, where he won eight.

The achievement was all the more extraordinary as the music industry was then more racially polarized, with Jackson the first African American artist to enjoy significant airtime on MTV.

"It is crystal clear that Michael Jackson is simply the greatest, and biggest, artist of all time," L.A. Reid, chairman of his label Epic Records, said as he saluted the new feat.

"Thriller" scored renewed sales with the release of a reissued 25th anniversary edition in 2008 and Jackson's death a year later.

The album was certified as 29 times platinum less than two months after his death.

"Thriller" is also the best-selling album worldwide, with no other work coming close.

Exact global figures, however, are difficult to quantify.

Jackson's estate says that "Thriller" has sold more than 100 million copies worldwide, although some experts believe that figure is inflated.

British ballad singer Adele recently set the record for fastest sales in the United States since at least 1991, with her album "25" selling more than five million copies less than a month since its release.

But many experts doubt that any album will ever match "Thriller" in sales, at least in the Western world, with 21st-century fans enjoying instant access to a huge array of digital music.
Last Update: Dec 16, 2015 5:20 pm