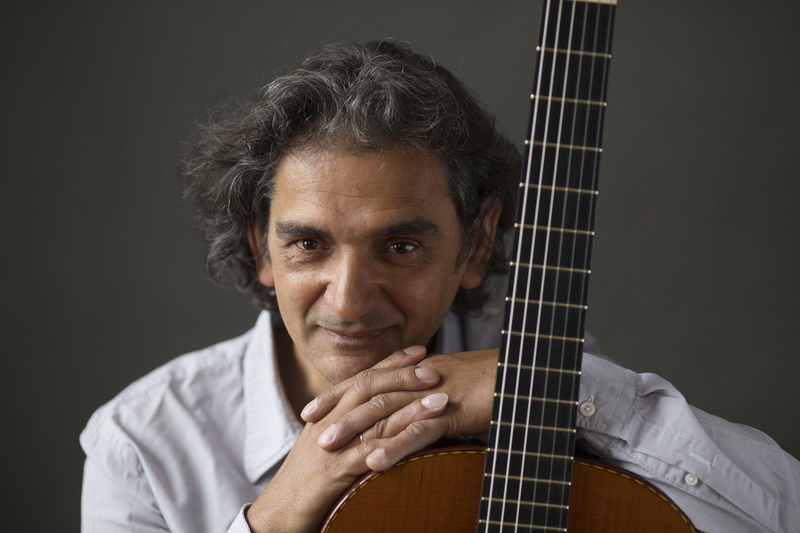 by Daily Sabah Jan 19, 2016 12:00 am
Akbank Sanat continues to host the most prominent musicians in the new year, as part of their annual Guitar Days concert series. Guitarist and composer Ferenc Snétberger will take the stage tomorrow and warm Istanbulites with Flamenco and Brazilian rhythms.

Born in 1957 in northern Hungary, guitarist and composer Snétberger was the youngest member in a musical household. Taking his father, an accomplished guitarist, as a role model, Snétberger studied academically both classical music and jazz guitar. Today he is best known for compositions which transcend physical borders. His music is inspired by the Roma traditions of his home country, Brazilian music and flamenco, as well as classical guitar playing and jazz. He has recorded numerous solo albums and collaborated with various artists touring all over Europe, as well as Japan, Korea, India and the U.S. Considered as one of the most influential and respected contemporary composers writing for the guitar, award-winning guitarist and composer Marek Pasieczny holds three master's degrees in music. In 2010, he began a combined doctoral degree in composition and performance in Australia, before returning to Europe in 2012, continuing his Ph.D. at Surrey University in Guildford, the U.K. Moreover, Pasieczny has taken up lectureship in composition and orchestration at the university. As a composer, guitarist, lecturer and adjudicator the musician performed all over the world including Czech Republic, Greece, Bosnia and Herzegovina, the U.K., Italy, Australia, New Zealand and South Africa and collaborated with significant artists such as Pat Metheny, Clarice Assad, David Russell, Roland Dyens, Carlo Domeniconi and Ana Vidovic. In 2012, Pasieczny became a "D'Addario artist" and also featured on the cover of the prestigious Classical Guitar Magazin. He will take the stage on Jan. 28 at Akbank Sanat as a part of Guitar Days.

Jean-Baptiste Hardy was born in 1989 and grew up in southern France. He began playing the classical guitar at the age of 8 and mastered it for 10 years. During his musical education, he discovered and learned the fingerstyle repertoire of Chet Atkins and Jerry Reed. In 2003, 2005 and 2007, he attended the Chet Atkins Appreciation Society festival in Nashville, and was lucky to perform there and meet with great players such as Tommy Emmanuel, Buster B Jones, Jim Nichols, Bruce Mathiske, and many more. In 2012, he decided to live in Istanbul where he could fully devote to his musical career. Istanbul Francophone Music School quickly recruited him as a guitar teacher. Currently, Hardy often performs on the Istanbul jazz scene with his trio or quartet, but also appears with other bands or singers. He has just released his new album titled "On Verra," from which he will perform on Akbank Sanat's stage on Jan. 30.
RELATED TOPICS