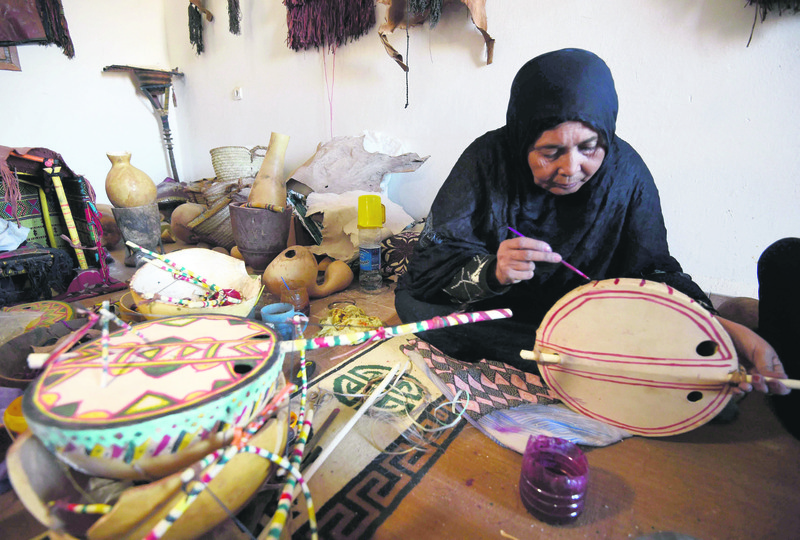 Women have long played the imzad in the matriarchal Tuareg communities of the Haggar and Tassili mountains of southern Algeria and neighboring desert regions of Niger and Mali. But by the early 2000s, only two women in Algeria still played the unique instrument crafted out of half a gourd shell covered in animal skin, a wooden handle and a string of horse hair. Young Tuareg women - enticed by modern commercial beats - had lost interest in the instrument, which requires "a certain understanding of time," German ethnologist Edda Brandes says. But today, thanks to the "Save the Imzad" association, dozens of young women are again learning how to use an arched bow to stroke the imzad's string in three schools in the vast Haggar region.

Men risk a curse if they play the instrument, according to an ancient belief. Khoulene Alamine, who is in her eighties, teaches her art to younger generations in the desert town of Tamanrasset.

"I'm happy to be able to pass on this art I've been playing since I was 10," she says. "I hope all girls pick it up... The imzad should be played by young and beautiful girls." The instrument's discreet, refined lament has traditionally accompanied poetic or popular songs glorifying the feats of past heroes. "There won't be any music," warriors would cry after a defeat. On a carpet on the sand of the Tagmart plateau, around 30 kilometers outside Tamanrasset, Alamine sits up straight, holding the imzad over her crossed legs. She plays, her right hand on the bow, her gaze lifted to the crescent moon that has appeared in the sky. Sitting beside her in the sunset's red hue, a poet in a long blue robe recites some verses.

"The imzad's sound gives me incredible energy," Husseini Nekhat says. In Tuareg tradition, the instrument accompanied courtship meetings called "ahal" that could last long into the night. Engineer Farida Sellal, who was born in Algiers, witnessed these customs when she was worked as a post office and telecommunications official in Tamanrasset in the 1970s. Her passion for the desert drew her back to the area three decades later. "There were only two women left still playing the imzad and no more ahal," she says. When she asked a community leader what had happened, he jokingly replied: "It's your fault. You brought us the telephone!" In 2003, together they formed the Save the Imzad association. Ten years later, they managed to have the "practices and knowledge linked to the imzad" added to a UNESCO Intangible Cultural Heritage of Humanity list. Founding member Seddik Khettali travelled from Tamanrasset to plead the instrument's case at a UN gathering in Azerbaijan.

"I'm the first Tuareg to have spoken in our own language" to the U.N. cultural agency, he says proudly.

The "Home of the Imzad" opened in Tamanrasset, aiming to become a beacon for Tuareg culture. It hosts a recording studio, a dance studio, a stage for performances and a workshop for making the instrument. Inside, imzad maker Cheynoune Zeineb sits cross-legged on a carpet surrounded by several female apprentices. In her fingers, she holds a string of horse hair whose far end is lodged between her toes.

And patience. It can take several days to make the instrument, whose dried out half of a calabash shell is sometimes picked from the center's own garden. A gazelle or goat's skin is stretched over this sound box and pierced with two sound holes, then decorated with personalized Tuareg motifs. Its handle is made of acacia or oleander wood. Music producer Mehdi Bennacer believes the imzad will now survive, especially with renewed interest worldwide for Tuareg music, such as that of desert blues band Tinariwen. "The search for one's origins won't ever end," he says, and "the sound of the imzad will live on".
RELATED TOPICS