A multi-cultural choir singing for peace 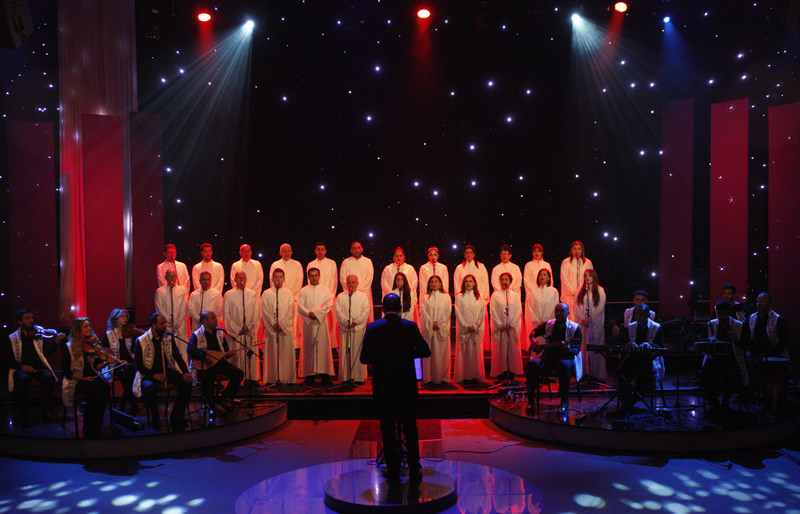 by Daily Sabah with AA Feb 22, 2016 12:00 am
The Civilizations Choir of Antakya, consisting of musicians from six different sects and three monotheistic religions, dedicates songs to Syrian people to draw world attention to the civil war in Syria and people's tragedy. Nominated for the 2012 Nobel Peace Prize, the Civilizations Choir of Antakya, a mosaic of exceptional performers from Turkey, is composed of 120 people including Catholics, Jews, Muslims, Orthodox Christians, Armenians, Alevis and Sunnis; people from various professions and walks of life. Founded in 2007, the choir is a symbol of Turkey's unique heritage, a place which diverse civilizations and religions have called home throughout the centuries. Spreading a message of peace and friendship, the Civilizations Choir of Antakya has performed all over Turkey as well as around the world, from Beirut to Kosovo. Through the universal language of music, the choir strives to act as a bridge between civilizations. The choir also organizes a talent exam every year to bring new musicians to sing for the brotherhood of people.

Speaking to Anadolu Agency (AA), Yılmaz Özfırat, the president of the Civilizations Choir of Antakya Foundation, said they sing their songs for all people as they believe in the philosophy attributed to Anatolian dervish Yunus Emre : "Love the creation for the sake of the Creator." He said that they wish to perform in Damascus and Aleppo and added, "We want the Syrian civil war to end. We want peace to rule over the Aegean. We deeply feel the sorrow of Turkmen people on the other side of the border. Despite the actions of the rest of the world, we stand by our Syrian brothers and sisters and dedicate our songs to them. I hope that the war stops as soon as possible and everybody returns to their homelands, living peacefully." Özfırat said that they have included two hymns in Arabic to their repertoire. "We see blood and tears all the time. We consider everybody as our brothers and sisters. We are a nation that has lived together side by side since the Ottoman Empire. We will continue to fight against these inhuman actions, until our last breath," he added.

The choir is currently on a tour of 14 countries to spread a message of peace and friendship all around the world. Through the universal language of music, the choir strives to act as a bridge between civilizations.
RELATED TOPICS