Indie rock to shine at Salon this week 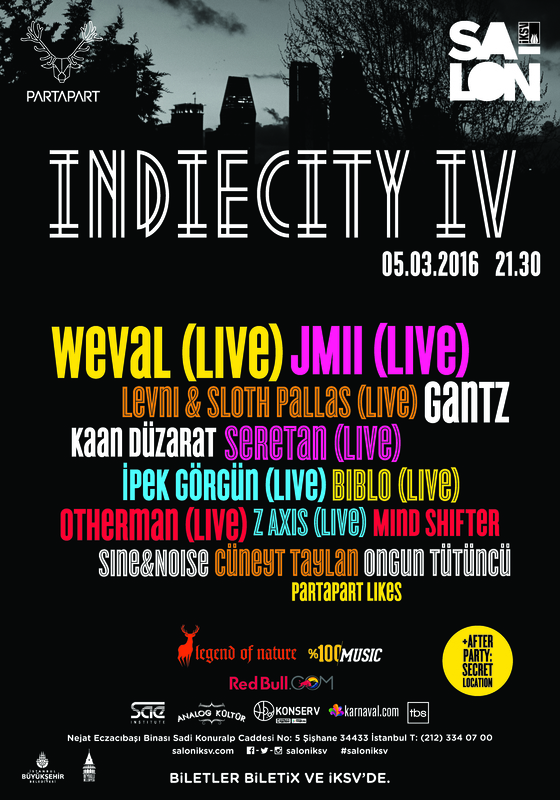 by Zeynep Esra İstanbullu Mar 01, 2016 12:00 am
The Istanbul Foundation for Arts and Culture's (İKSV) Salon continues to introduce international alternative musicians to Istanbul audiences. In addition to exciting concerts, the National Theater's selected plays are currently being screened at Salon as well.

Co-organized by İKSV Salon and Sofar Sounds Istanbul, the "From Sofar to Salon" concert series continues to host the best figures of alternative music on İKSV Salon's stage in March. Turkish dream pop and indie rock band The Away Days, which opened for Owen Pallett and Unknown Mortal Orchestra in the past, will bid farewell to their fans before they set off on their "South by Southwest" adventure. Merve Çalkan, who has covered her own songs as well as well-known tracks with her acoustic guitar since 2012, will also perform her unique compositions, blending pop and folk for İKSV Salon's audience. Kahraman Deniz, who is one of the most special discoveries of Sofar Istanbul and the favorite artist of Sofar's fans, will give an unforgettable concert with his unique vocals, catchy guitar melodies and literary lyrics. The tickets for "From Sofar to Salon" cost TL 35 ($11.82) for adults and TL 25 for students, and tickets are available at İKSV's main ticket counter.

Organized for the first time in 2012 to unite artists who have original style, IndieCity is ready to meet Istanbulites for the fourth time. The event that gathers outstanding Turkish and International musicians under the same room has previously hosted bands such as Solardip, The Away Days, Son Feci Bisiklet, Softa, Mind Shifter, Da Poet, Fakepakt, Men With A Plan, Astrofella and Farfara. The one-night festival, which is organized by indie record company Partapart, will welcome Weval, JMII, Gantz, Levni & Sloth Pallas, Z Axis, OtherMan, Seretan, İpek Görgün, Biblo, Gantz, Kaan Düzarat, Mind Shifter, Sine & Noise, Cüneyt Taylan, Ongun Tütüncü and Partapart Likes on the İKSV Salon stage. The tickets for the concert are TL 50 for adults and TL 40 for students, and tickets are available at İKSV's main ticket counter.

The İKSV initiative "Oyun Salonu" continues to screen the National Theater's famous production of Shakespeare's "Hamlet." Academy Award nominee and Emmy Award winning British actor Benedict Cumberbatch, who has been enshrined in the audience's memory with his roles in blockbuster movies "12 Years a Slave," "The Hobbit" trilogy and the BBC TV series "Sherlock," animates one of Shakespeare's best characters, Hamlet. The stage production of the National Theater – one of the most important British theaters – broke records with more than 225,000 viewers when it was broadcasted live at 1,400 cinema halls in 25 countries. The tickets for the National theater production of Hamlet sold out a year ago before the performance at the Barbican Centre in London. Directed by Lyndsey Turner and produced by Sonia Friedman Productions, the adaptation of Shakespeare's "Hamlet" will be screened on March 6. The tickets for the screenings are TL 50 for adults and TL 30 for students.