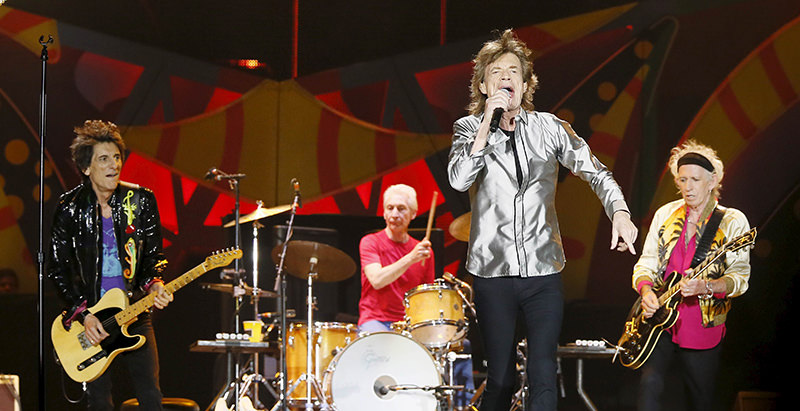 The Rolling Stones Mick Jagger sings next to band member Keith Richards, Ronnie Wood and Charlie Watts during a concert on their ,Latin America Ole Tour, in Santiago, Chile, in this file photo taken February 3, 2016 (Reuters Photo)
by Anadolu Agency Mar 02, 2016 12:00 am
Legendary rock band the Rolling Stones announced Tuesday that it will play a free concert in Cuba later this month.

The band will perform March 25 at the Ciudad Deportiva in the capital, Havana -- just four days after President Barack Obama visits the island nation.

The "Concert for Amity" will be a "landmark event for us, and, we hope, for all our friends in Cuba too," the band said in a statement posted on its website.

The concert comes amid an opening in relations between Washington and Havana that has promised to end decades of enmity between the Cold War rivals.

And there seems to be no shortage of fanfare for the performance in the Obama administration. "I'm sure it'll be a hell of a concert," State Department spokesman John Kirby told reporters.

He was not immediately aware of any agency activity that helped facilitate the show.

The March 22 game will be the first time a major league team has played in Cuba since 1999.

The league said on social media that it is "honored" that Obama "plans to attend," which Obama retweeted with an enthusiastic, "Play Ball!"

Washington and Havana announced December 2014 that the two countries would work to normalize relations and have since opened embassies in each other's capitals.

While hurdles remain, including the status of the naval facility at Guantanamo Bay and the U.S. embargo on Cuba, the opening nonetheless has facilitated business and cultural ties not seen since the 1950's.

In addition to the Stones, Irish rockers U2 and former Beatle Paul McCartney are also reportedly planning performances in Cuba.
Last Update: Mar 02, 2016 9:39 am
RELATED TOPICS