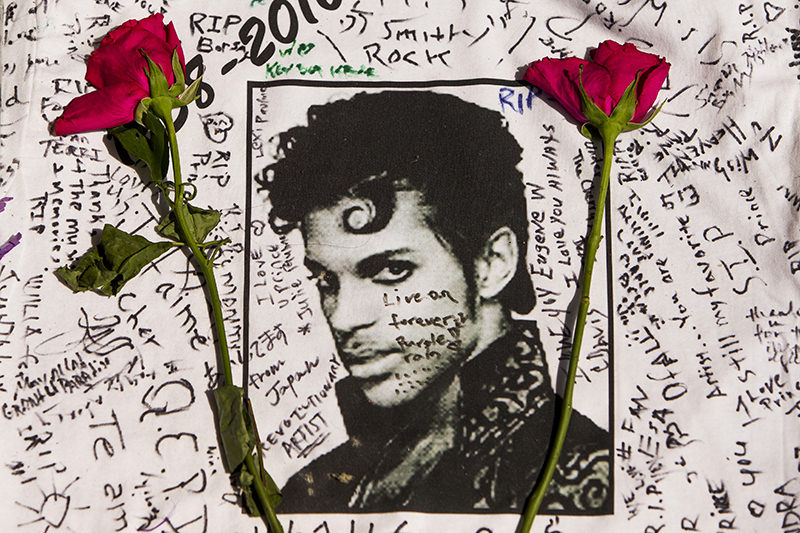 Stunned fans of Prince looked Friday to an autopsy to help lift the mystery around the sudden loss of one of the music world's most respected and beloved figures.

A day after the enigmatic pop superstar died at age 57, a steady stream of people filed past his Paisley Park studio complex on the outskirts of Minneapolis to pay their respects and place flowers and handwritten messages.

Many wore purple, his signature color. Many said how proud they were of the city's native son, and how saddened they were by the fact that he died alone -- as well as by unconfirmed reports his death could be linked to an overdose of painkillers.

"It breaks my heart," said Cindy Legg, a 41-year-old nurse. "Hopefully it was just not any of that and it was just God needed him in heaven."

Prince was found dead in an elevator at Paisley Park, a week after being taken to a hospital with a flu-like illness that he later downplayed.

The local sheriff was to brief the media at 3:00 pm (2000 GMT) on the investigation into his death, which remains unexplained.

The singer's autopsy began early Friday, according to the local medical examiner's office, which cautioned that preliminary results will take days and the results of a full toxicology scan could be weeks.

"As part of a complete exam, relevant information regarding Mr. Nelson's medical and social history will be gathered. Anything which could be relevant to the investigation will be taken into consideration," the office said in a statement.

Entertainment website TMZ, citing unnamed sources, reported that Prince was treated for an overdose of the opioid-based painkiller Percocet in the week before his death.

After a show in Atlanta, the singer was taken to hospital after his private jet made an unscheduled landing in Moline, Illinois.

"Multiple sources in Moline tell us Prince was rushed to a hospital and doctors gave him a 'save shot'... typically administered to counteract the effects of an opiate," TMZ said. AFP could not immediately verify the report.

Small in stature but an electrifying live performer, Prince became an international sensation in the 1980s, fusing rock and R&B into a highly danceable funk mix.

The sudden loss of the "Purple Rain" legend, a Grammy and Oscar winner acclaimed for his guitar and keyboard skills and soaring falsetto, prompted an outpouring of tributes -- and spontaneous celebrations.

In New York, director Spike Lee led a Prince sing-along at a packed block party in Brooklyn while in Minneapolis, where a bridge was lit up in purple in Prince's memory, the atmosphere was carnival-like with the crowd erupting into renditions of his hits.

"You know, he was the greatest artist of all time. There will never be another one like him," said Antonio Harper, one of thousands who partied through the night in Prince's hometown in a bittersweet farewell.

"I cried, I cried a few times all night. Every time they played his music, songs that hit me," said Melody Johnson, part of the crowd that gathered at the First Avenue club, where Prince shot "Purple Rain," the rock musical featuring songs from the album of the same name.

"Queen of Soul" Aretha Franklin led an outpouring of tributes from the entertainment industry, describing him as "an original and a one of a kind."

Rolling Stones frontman Mick Jagger called Prince "one of the most unique and talented artists of the last 30 years" while former Beatle Paul McCartney tweeted that he saw in the New Year with the singer and that he had seemed in good health.

President Barack Obama, who invited Prince to play a private White House show last year, let slip that he played some of his records Friday morning at the US ambassador's residence in London, where he is staying.

"It happens there's a turntable and so this morning, we played 'Purple Rain' and 'Delirious' just to get warmed up before we left the house," Obama told a joint press conference with British Prime Minister David Cameron.

"He was a great performer. And creative and original and full of energy. And so it's a remarkable loss."

Prince -- whose huge catalogue of hits includes "1999," "Cream" and "Kiss" -- was prolific in his output, recently releasing albums through streaming site Tidal, and had taken to scheduling shows at the last minute to avoid scalpers.

Named after his jazz pianist and songwriter father's stage name, the pop icon was born Prince Rogers Nelson in Minneapolis. In 2004, he was inducted into the Rock and Roll Hall of Fame.

Prince was in the middle of a pared-back "Piano and a Microphone" tour when he began experiencing health problems.

But the Saturday before he died, the musician invited fans via Twitter to a "dance party" at Paisley Park, where he kept his back recordings in vaults, as a way to prove his health problems were behind him, Minnesota's Star Tribune newspaper reported.

"Wait a few days before you waste any prayers," he reportedly told the roughly 200 in attendance.