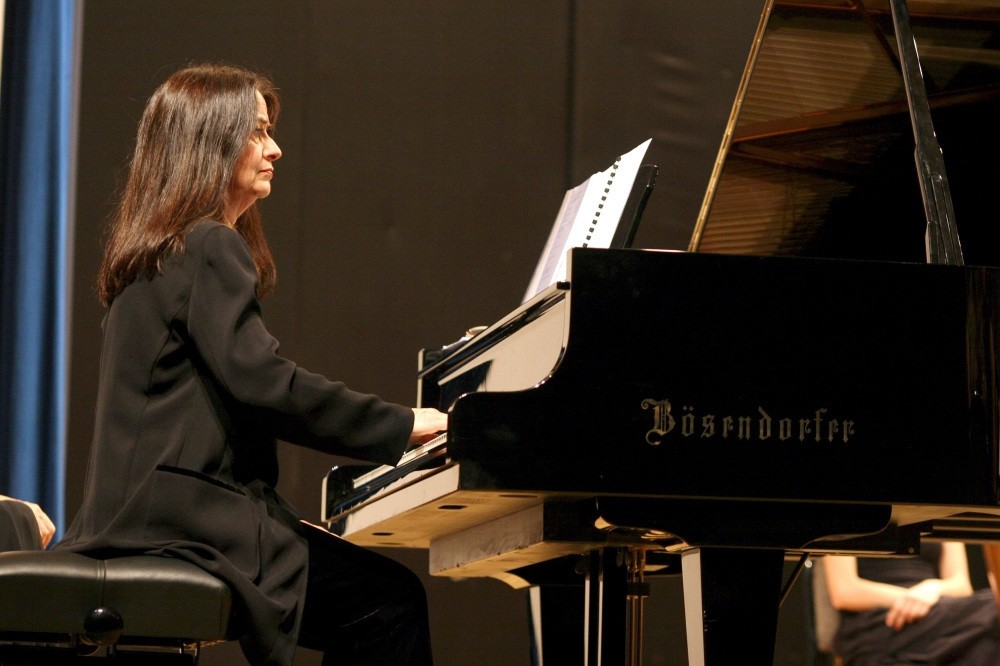 u201cWe, the artists, desire to be loved by our audience and friends. Therefore, I am very lucky. Those who come to listen to me know my music and love it, which is what makes me most happy,u201d Karaindrou said.
by Daily Sabah Jun 07, 2016 12:00 am

Internationally famous for her compositions in renowned director Theodoros Angelopoulos's films like 'The Weeping Meadow' and 'Eternity and a Day,' accomplished Greek musician Eleni Karaindrou gave insight about her musical journey

World-renowned Greek composer Eleni Karaindrou was in Istanbul to give a concert with the Istanbul Symphony Orchestra in late May. During her visit, Karaindrou spoke to Anadolu Agency (AA) and offered insights to her long and established career. Karaindrou who does not think much of being successful said, "The most important thing for me is to have as many friends as possible. I have friends all around. This is significant. We, the artists, desire to be loved by our audience and friends; therefore, I am very lucky. The audience is the same in Estonia, China, Turkey, Germany and everywhere else in the world. Those who come to listen to me know my music and love it, which is what makes me most happy."

Seventy-five-year-old Karaindrou became interested in a professional musical career at the young age of 7 when she began to play piano. "I loved music so much, even back then," Karaindrou said. At the advice of her music teacher, the Greek artist began to play the saxophone as well. "I realized that I was meant to be a composer. In high school, I discovered that I loved composing music; however, I continued playing piano and studying music theory throughout my career," she said.

The artist also opened up about her childhood, stating that her family was a strong supporter of her musical career. "I lost my mother at the age of 7 and lived with my father and brother from that point on. My father was a mathematics professor; however, he loved music and discovered that I loved music as well so he supported me." The artist stressed the fact that playing the piano has been a soothing activity during the worst times of her life. "I did not have any problems with my family regarding my musical career, but I promised my father I would go to university. Hence, I received my bachelor's degree in archaeology but never quit studying music and piano." So far, Karaindrou has composed more than 100 compositions and gives these precious musical pieces to her beloved friends. She also composes compositions for her personal album recordings as well as movie soundtracks and stage plays. Currently, Karaindrou is working with ECM Records in Germany and continues to record her studio albums with the company. "The owner of the record company, Manfred Eicher, is a friend of mine and I can say that he is a genius. ECM Records and I have been working together for the past 27 years and I recorded most of the albums in my discography with them," Karaindrou added.

The Greek artist said that she came to Istanbul for the first time many years ago, adding that "When I first came to Istanbul, I was a jury member at a film festival. Also, 10 years ago, I visited Ankara and other cities in Turkey in part of a concert series." Karaindrou shared her happiness to be in Istanbul and says that the city is amazing. "I feel privileged to be here. Istanbul is a beautiful and wonderful city which gives inspiration to artists, encourages poets to write new poems and urges painters to paint. For me, Istanbul will always be a special city. Whenever I come here, I really feel like it is home. The Turkish audience is one of the best audiences in the world. I know that they understand what my music aims to deliver. I look at the faces of the audience during the concert and feel like I know everyone from another life," the artist said. Karaindrou gained international fame for her compositions featured in Greek director Theodoros Angelopoulos's 2012 film. The composer released various albums including, "Voyage to Kithira," "Elegy of the Uprooting," "The Weeping Meadow," "Trojan Women," "Eternity and a Day," "Ulysses' Gaze" and "The Suspended Step of the Stork."
RELATED TOPICS