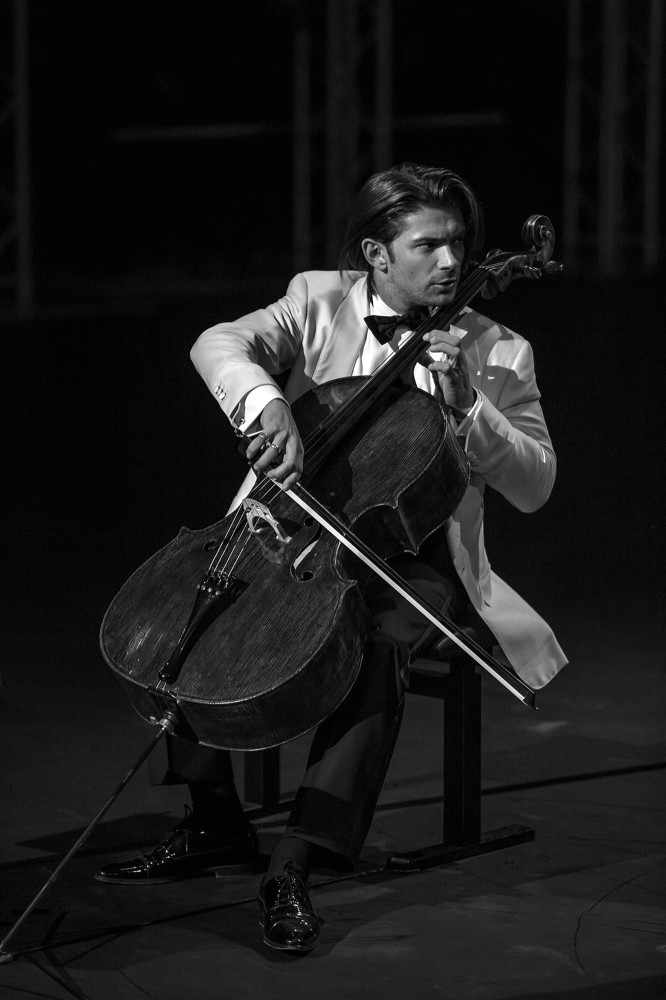 Gautier Capuu00e7on will be accompanied by the Beethoven Academy Orchestra and will make a reference to the festivalu2019s theme by performing Prokofievu2019s u201cRomeo and Juliet Suites.u201d
by Zeynep Esra İstanbullu Jun 16, 2016 12:00 am

Organized by the Istanbul Foundation for Culture and Arts, the 44th Istanbul Music Festival brings together respected musicians and orchestras throughout this week

The 44th Istanbul Music Festival brings violinist and viola player Isabelle van Keulen and her ensemble together with Tango Nuevo, created by Argentinian composer Astor Piazzolla, synthesizing traditional tango melodies with classical music forms and jazz elements. Founded in 2011 by van Keulen, who has an excellent reputation as a violinist and a viola player and as a soloist who collaborates with prominent orchestras, the ensemble consists of bandoneon player Christian Gerber, one of the best musicians of his generation, contrabass player Rüdiger Ludwig, and pianist Ulrike Payer. The ensemble earned a devoted fan base from its very first live performance and made a name for itself with concerts at the Rheingau Music Festival, Schleswig-Holstein Music Festival and the Delft Festival. The romantic melodies of Tango Nuevo and the innovative rhythms of the Isabelle van Keulen Ensemble, will echo at the summer residence of the Consulate General of Germany in Tarabya tonight at 9 p.m.

Where: Consulate General of Germany's summer residence in Tarabya

With two concerts at this year's Istanbul Music Festival, the Beethoven Academy Orchestra will perform for the first time with Herbert Schuch, one of the most talented pianists in contemporary classical music. The orchestra and Schuch will perform Rachmaninov's "Rhapsody on the Theme of Paganini" and the Turkish premiere of Polish composer and visionary Weinberg's "Symphony #4." Having won the ECHO Klassik Award two years in a row, Schuch collaborated with numerous orchestras, such as the London Philharmonic Orchestra, the Tokyo NHK Symphony, the Camerata Salzburg and the Denmark Radio Symphony and prominent maestros, including Pierre Boulez, David Foster, Yannick Nézet-Séguin and Valery Gergiev. Consisting of young, talented Polish musicians, the Beethoven Academy Orchestra earned its place among the prominent new generation orchestras in the world soon after formation. They released albums with record companies, such as DUX Poland, Centaur Records USA and Universal Music, and recently signed a deal with EMI. The orchestra stands out due to its collaborations with Hans Zimmer, Elliot Goldenthal, Michal Lorenc and Jan A. P. Kaczmarek and film soundtracks. Prior to the concert, Aydın Büke will give insights concerning the concert program and composer Weinberg at 7 p.m.

The Beethoven Academy Orchestra under the baton of Jacek Kaspszyk will perform Saint-Saens' "Cello Concerto 1" and Massenet's "Meditation" with the shining star of the classical music stage, cellist Gautier Capuçon. The orchestra and Capuçon will make a reference to the festival's theme by performing Prokofiev's "Romeo and Juliet Suites." Described as "the ideal mix of elegance and performance art" by BBC Music magazine, Capuçon takes the stage as a guest artist with orchestras from all over the world, including the Berlin Philharmonic, the New York Philharmonic, the Amsterdam Concertgebouw and the Tokyo NHK Symphony. The musician, who has won various music awards for his distinguished musical talent, stands out for his large repertoire and discography. Prior to the concert, Dikmen Gürün will offer a panel session on English bard William Shakespeare at 7 p.m.

Part of the Istanbul Music Festival for the last two years, the Weekend Classica program continues to offer free-of-charge music concerts to festival devotees. The last concert in the series takes place June 19 in the garden of the Sakıp Sabancı Museum. The young and dynamic cellist quartet 4Cellos will perform classical music, ranging from Villa-Lobos to Debussy, enabling you to hear the deep and soft rhythms of the cello. Award-winning young Turkish cellist Poyraz Baltacıgil joins the quartet during a performance of Max Bruch's "Kol Nidrei," a pleasant surprise for the audience. Sponsored by Pernigotti, Weekend Classics takes place on Saturdays and Sundays throughout the festival.

Where: Garden of the Sakıp Sabancı Museum
RELATED TOPICS