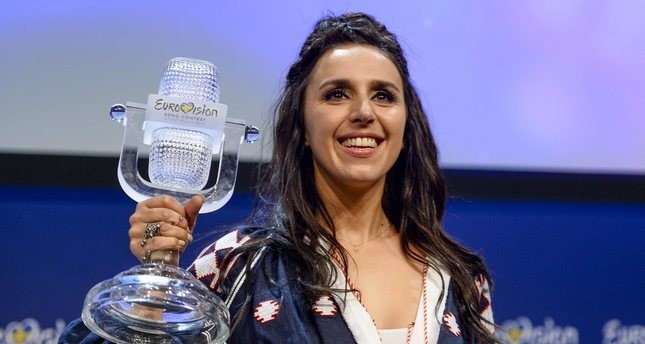 by Anadolu Agency Aug 18, 2016 12:00 am
On Tuesday night, Jamala performed a duet with Sertab Erener, a well-known Turkish singer/songwriter who won the 2003 Eurovision Song Contest with the song "Every way that I can."

Before a scheduled concert in Istanbul on Wednesday as part of the "Turkcell Yıldızlı Geceler" (Nights Full of Stars) program, Jamala told reporters she felt "completely safe" in Turkey, despite the attempted coup last month.

Jamala said: "I know very well from Ukraine's unpleasant experiences that music is an inspiration and a source of hope for people. That's why I came to Turkey. I feel completely safe here. I feel no danger at all."

In May, Jamala won the 2016 Eurovision Song Contest with her song "1944," which addresses the deportation of the Crimean Tatars ordered by the Soviet leader Joseph Stalin.

Jamala added that she had invited President Recep Tayyip Erdoğan to attend her concert on Wednesday.

Offering her condolences to the families of the victims of the July 15 coup attempt, Jamala said her songs draw inspiration from tragedy.

"Any tragic incident can become a source of inspiration. My only wish is to tell history - a history that I saw with my own eyes," referring to the often tragic history of the Crimean Tatar people.
RELATED TOPICS