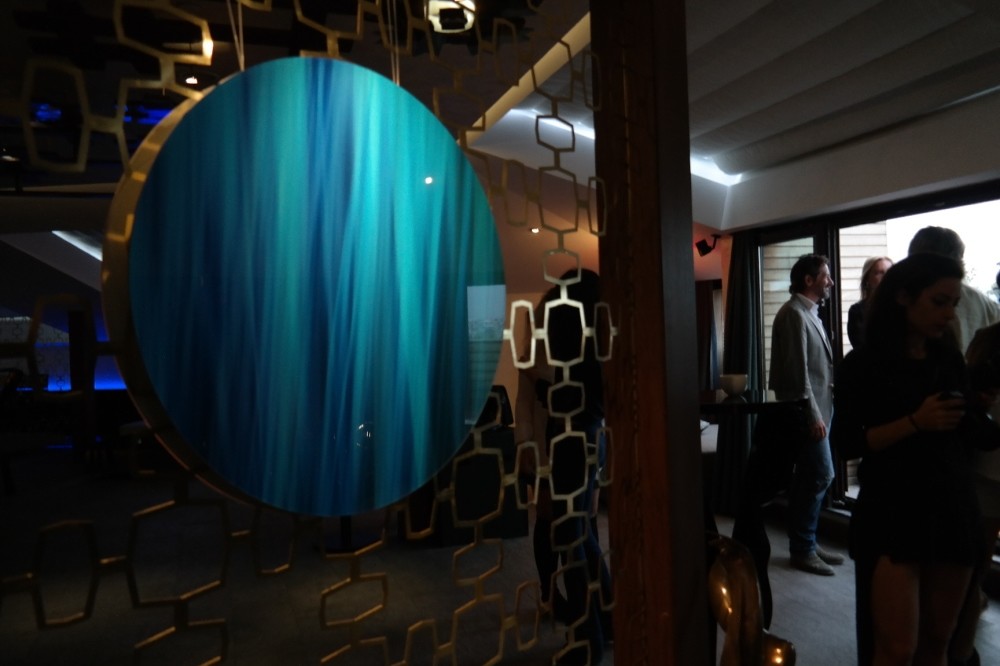 by Anadolu Agency Sep 24, 2016 12:00 am
The exhibition of famous Mexican artist Rodolfo Choperena titled "50," which contains works of his "photography performance," opened its doors yesterday and welcomes visitors until Oct. 18 at the Gama Art Gallery.

Speaking to Anadolu Agency (AA) at the special preview before the opening, award-winning Mexicana artist Rodolfo Choperena noted that he mostly uses his personal belonging to create his works and even though his main tool for creating art is the camera, he does not deem his art as simple photography but rather a photography performance. He said that he uses his clothes along with various other personal items and sometimes even flowers in his garden, which become a part of his creations. He likes to experiment with different objects in his works, testing them as to whether they suit the composition and creating still-life art. "I use things I like together with colors to produce a beautiful product; then, I remove the actual material I use and again a beautiful site is left," Choperena said.

The 50-year old artist notes that he turns photography into an abstract art form while he takes photographs, utilizing his camera's time exposure technique to create unique images. "Thus, I actually push the main object I use out of the concept and turn the photo into something abstract," said Choperena who added that visitors will enjoy very colorful performances including seven works that are circular and display his personal love of circles. Accordingly, seven circles represent the chakras, or different energy points in our bodies, and are represented by various colors ranging from red to blue and violet to orange. Fourteen of Choperena will be displayed at the exhibition, the majority of which include flowers portrayed in a non-traditional way, along with circular works.

Choperena said that he visited Turkey for the first time last year and that he loved both Istanbul and Turkey and was honored to be invited to the exhibition. "I really liked the variety and the diversity of people around; the ethnic diversity, different religions, colors, textures, smells and food culture. Actually, I liked everything [here] as such things are what make a country rich. I believe Turkey is one of the richest countries in the world," Choperena added.

Choperena couldn't find time to see much of Istanbul in his brief 10-day trip but he will definitely be back to make some shoots in Istanbul, especially in Istanbul's markets, from the fish market to the spice market. "The colors and textures are beautiful enough to inspire many artists. I took a ferry and went to a fish market where I saw different tones of silvery gray. I will definitely be back here to take photos," Choperena noted.

Regarding the recent coup attempt and terrorist attacks, Choperena reiterated that such things do not stop him from visiting a country, emphasizing that the entire world has problems and is, as a whole, going through a very rough time, saying: "Mexico has its own problems, so does the U.S. If you give up on living, it means that the others win."

The owner of Gama Gallery, Şule Altıntaş stated that the gallery now has a six-year past and it covers all forms of contemporary art. "We aimed to create a platform with both Turkish and international artists. We met with Rodolfo by chance last year; a collector of ours had recommended him and we viewed his works, liked them and contacted him and agreed on this exhibition," Altıntaş said. The preparations for the exhibition took roughly a year and Altıntaş said that both ideally and technically Rodolfo's works are uniquely suitable for the gallery which aims to display unique works created via unique methods.

The exhibition can be visited at the Gama Art Gallery until Oct. 18.
RELATED TOPICS