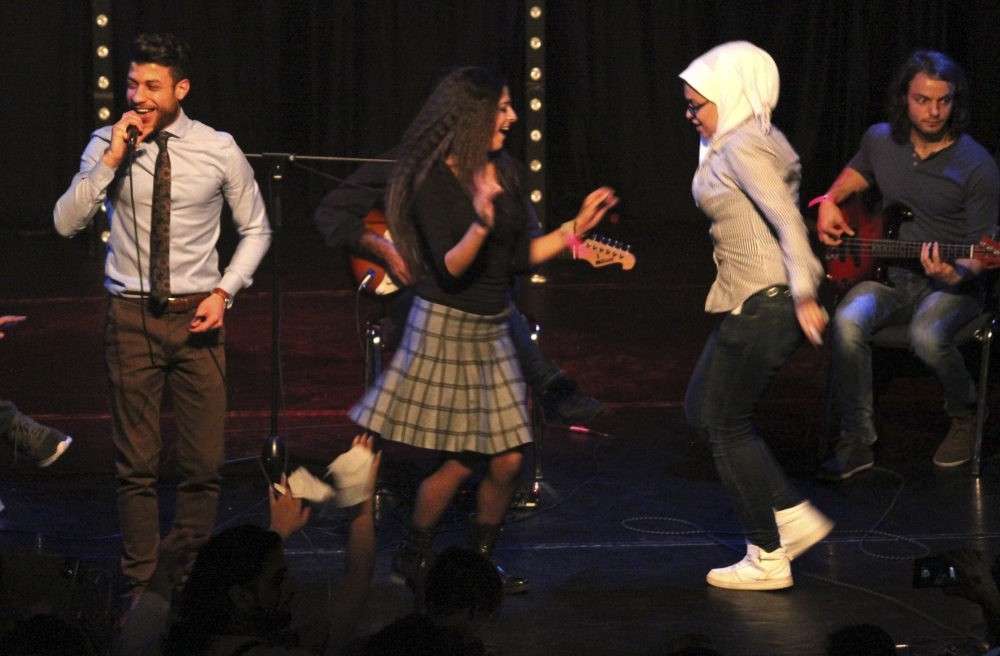 A group of women dance on stage during the performance by the Syrian band Musiqana at the u201cRefugees in concertu201d event in Berlin.
by Associated Press Oct 14, 2016 12:00 am
Music from Syria took over a Berlin nightclub known for its punk, rock and techno music in a "refugee concert" organized to help break the ice between the new arrivals and residents of the German capital. Germany saw an influx of 890,000 asylum-seekers in 2015, the largest single group being Syrians fleeing their country's civil war, and the destruction of Aleppo was a recurring theme in the weekend concert.

Abdallah Rahhal who performed with his band Musiqana said he hoped music could give the Syrians in the audience — about half of the 250 people who attended — a chance to think about something else for a short time. "What we can do is give people a little hope, give them a little comfort and maybe make them forget the war for a little while," he said. "And use the music to remind them of the nice things before the war." The concert at the OC23 venue opened with a "Hope Choir," where half of the members are German and the other newly arrived Syrian migrants, and ended with a performance by Aeham Ahmad, a pianist from Yarmouk, a Palestinian refugee camp near Damascus, who rose to fame after posting videos of himself playing piano in the ruins of his home city.

Several Syrians in the audience said that they hoped that the concert would introduce Germans to Syrian culture and counter the steady flow of negative news from their home country. "Despite the war, despite all the people that are dying and all the bloodshed in our country, despite all that, we are happy to show off our culture," said Abeer Al Moussly, an asylum-seeker from Damascus who has been in Germany for one year.

Judging from the atmosphere, the concert had its desired effect. "I thought it was great," said Berlin resident Saskia Miersch. "It was really powerful and with lots of energy. There was also a lot of joy." During the performance by Musiqana, a band that was formed nine months ago by asylum-seekers in Berlin, a crowd of women jumped on stage and danced along to the Syrian songs while Syrians and Germans danced together in the audience. "People that live here need this, some entertainment, meeting people from our own country, listening to our music and feeling free and safe," said Ahmad Almohammad, from Hama.

Entry to the concert, put together by Berlin-based concert organizer Achim Seuberling, was 8 euros ($9) for locals and was free for asylum-seekers and the unemployed.
RELATED TOPICS